About one-quarter of children in the U.S. under the age of 18 are immigrants or the children of immigrants, a status that often translates into educational disadvantages. 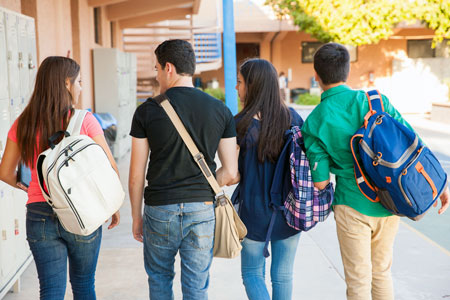 Ben Roth, a College of Social Work assistant professor, is working with colleagues at two other universities to survey school social workers nationwide on what they are doing to help those children navigate successfully through their public school experiences.

“We want to better understand what they do to better serve immigrant students in their schools and their views and understanding of immigration more broadly, knowing how politically divisive the topic of immigration is today,” Roth says. “These views can sometimes shape the way we think about and prioritize the work we do.”

The role that teachers and administrators play in shaping a school’s climate and how that affects students’ educational experiences is well documented, Roth says. But much less is understood about the role of school social workers in helping immigrant children.

“Depending on where they live and what their parents’ legal status happens to be, those students can encounter barriers such as lack of access to public programs that could help offset some of the disadvantages of poverty, for example,” he says.

To do their jobs effectively, social workers have to be aware of the terrain of immigration policy and how that might be impacting an immigrant family and a child’s performance in school. “That will help to understand and contextualize some of the presenting symptoms of a kid who’s acting out or not doing well,” Roth says.

Public schools are microcosms of society at large, he says, where the climate of inclusion is being sorted out as students decide what categories people fit into. “To varying degrees teachers and administrators address those realities, but school social workers have an ability to speak into that process in ways that we think are very important for shaping school climate,” Roth says.

“Schools remain central vehicles for preparing citizens for tomorrow — not just immigrant youth but their peers who have certain opinions that they may have inherited from their parents or from the larger society,” Roth says. “So to the extent that the schools are poised to challenge some of these assumptions or begin to improve and facilitate social cohesion, that’s a pretty exciting spot to be. And we’re interested in the important ways that school social workers might be contributing to that.”