Learning from past devastation helps prepare for future events

From a thousand-year flood to deadly hurricanes, South Carolina is no stranger to disasters. That’s why University of South Carolina researchers are working to better understand why dams fail, how to quickly map disaster areas and ways to improve how people with disabilities navigate natural disasters.

When the historic flood of 2015 hit the Midlands, thousands of residents took to social media to describe what they saw. It’s a practice repeated when hurricanes cause residents to flee the coast as users post about the experience on Instagram, Twitter and other sites.

Zhenlong Li and his colleagues at the Geoinformation and Big Data Research Laboratory in the College of Arts and Sciences see a treasure trove of information in such data. They conduct interdisciplinary research on geospatial big data analytics, high-performance spatial computing and cyberGIS.

Li, an assistant professor of geography, has established a high-performance, big data computing cluster that works on projects and applications including disaster management, climate change, human movement and public health. He has shown that Twitter and other social media channels are a new data source for disaster management and flood mapping.

“Traditional data collection practices such as remote sensing and field surveying often fail to offer timely information during or immediately following damaging events. People tweet what they see; it’s firsthand information in real time. Actually, sharing information such as texts, images and videos through social media platforms allows all citizens to become part of a large sensor network and a homegrown disaster response team,” he says. “There were tens of thousands of posts during the flood in just several minutes.”

For example, using data from social media posts during the flood, they developed an innovative flood mapping model that was able to generate flood maps in near-real time. Comparing with the U.S. Geological Survey maps, there was an 84 percent match between the flood map created through tweets and the official USGS flood map. Li’s map, derived from social media posts, covered the entire flooded area, and the information was available quickly. 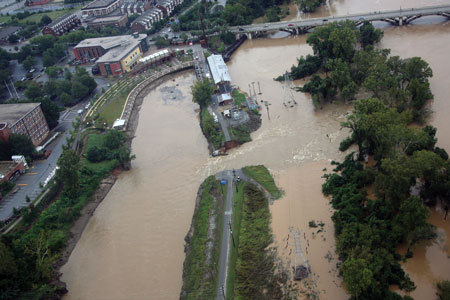 In October 2015, a historic flood hit the Midlands of South Carolina, damaging homes, roads and dams. Photo courtesy of The State newspaper.

Through millions of geotagged tweets, Li with his colleagues and students from the Hazards and Vulnerability Research Institute also were able to analyze where storm victims were posting, showing if and when people evacuated from hurricane zones and where they relocated to ride out the storm.

“We estimated that 760,000 people (54 percent of coastal population) evacuated from the South Carolina coast to a safer location during Hurricane Matthew, and this number agrees well with the official traffic count data and is consistent with the findings in previous studies,” he says.

“Social media data is huge and it’s noisy. It would be impossible to analyze it manually,” he says. “We are developing a suite of innovative parallel processing algorithms, spatiotemporal indexes and visual analytical tools to efficiently analyze and map the massive data. I believe that combining social media and big data computing during the rapid onset disasters can give emergency managers and others more relevant and possibly better decision support information.”

The soil’s the thing

Every building, road, bridge and dam needs a firm foundation. If the soil below the surface isn’t strong enough, it could spell disaster — especially in a flood, hurricane or earthquake.

Inthuorn Sasanakul, an assistant professor of civil and environmental engineering, studies the clay, rock, sand and other materials that support foundations and what’s built on top of them. She works with structural engineers, making sure buildings stay upright, bridges are built with earthquakes in mind and dams are constructed to withstand torrential rainfall.

“I like to understand soil behavior. It’s a fundamental. I like to know how these materials behave under different types of loading,” she says. “The dynamic and impact of water is challenging — we have a lot of uncertainty. It’s challenging and it’s important because every foundation is sitting on the ground.”

Her work also includes surveying damage after storms, learning more about what happens to structures such as dams and levees during and after floods. Her research into internal erosion, which occurs when soil particles within a dam or its foundation are carried downstream by water flow, is sought out by experts to help predict what will happen in storms and earthquakes. While surface erosion can be detected by routine dam inspections, internal erosion is not always visible and can go unnoticed for a long time.

“It’s a hidden problem in dams. In 2015, when we had the big flood, I investigated more than 20 dams in the area,” Sasanakul says. “Most of them, the water goes over the top, but a few dams had problems with internal erosion.”

Sasanakul also is a member of the state Floodwater Commission’s Smart River and Dam Safety Task Force recently formed by Gov. Henry McMaster. She works with other task force members, including local engineers, researchers and administrators, to identify critical dams in the state and provide recommendations to mitigate flood impacts.

The College of Engineering and Computing is home to a lab with a geotechnical centrifuge facility — the only one in South Carolina and one of just three in the Southeast. It’s used to study topics such as the resiliency of dams, levees, and natural and manmade hazards. The lab also recently acquired a shake table, making it the only place in the Southeast to research earthquake soil dynamics, Sasanakul says.

Until we’ve had an experience or walked a mile in one’s shoes, we don’t have the opportunity to understand an experience or what needs might be different or how those needs can be met. The takeaway is the need to heed the voices of lived experiences.

Clayton Copeland, a faculty member with the School of Library and Information Science

Her applied research has an immediate impact on people. For example, her report for the S.C. Depart-ment of Transportation will be used by engineers for their design to build road and bridge foundations. She is working to investigate the sediment in South Carolina’s coastal plain, including areas in Charleston and Myrtle Beach, to understand what is going on with soil beneath the surface.

“In South Carolina, we have one of the most challenging geological settings in the world. Our bedrock is very deep, it could be 1,000 or more feet deep in the ground,” she says. “Typically, foundation is on that bedrock. Because it’s so deep in South Carolina, there’s no way to put foundation on that rock. So you need to understand what’s happening between the surface and that rock.”

After drilling holes 500 to 600 feet deep, soil and rock samples were removed and categorized to see how the land would behave in an earthquake. “To design a bridge, you need to know this material. On top of that, you want to investigate what will happen if there’s an earthquake in Charleston along the coastal plain,” Sasankul says. “Near the coast, you have soft, loose sand deposits. If you have layers of that underground and an earth-quake shakes the ground, that soil could flow.”

Her interest in researching natural disasters started in the aftermath of Hurricane Katrina, which struck the Gulf Coast in 2005. She built small-scale models of the New Orleans levees, tested them in a centrifuge machine and was able to help determine why the levees — even those that weren’t topped by water — failed in Katrina.

It turned out that the levees, originally built with clay and sand, were raised higher over the years with steel walls as sea levels rose. Flooding from Katrina created a gap between the steel wall and the levee on the canal side, creating a path for water to flow. Researchers doing computer modeling tried to simulate what went wrong, but they weren’t able to offer the insights that physical modeling allowed.

A mile in their shoes

When the floodwaters rose across the South Carolina Midlands in 2015, homes were destroyed, shelters were opened, and victims were rescued and ferried to higher ground. The situation was especially difficult for people with disabilities, who faced a lack of accessibility in shelters and a lack of awareness and training among some emergency responders. 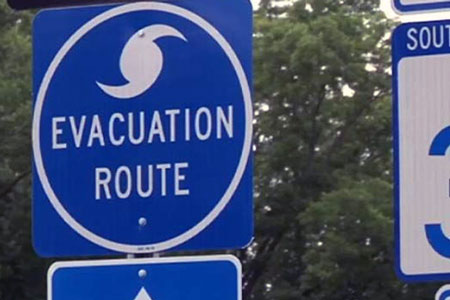 Zhenlong Li and his colleagues at the Geoinformation and Big Data Research Laboratory in the College of Arts and Sciences, used social media data to estimate 54 percent of South Carolina's coastal population evacuated to a safer location during Hurricane Matthew in 2016.

Clayton Copeland, a faculty member with the School of Library and Information Science and director of the SLIS Laboratory for Leadership in Equity of Access and Diversity, partnered with School of Medicine professors David Leach and Robert Dawson to understand how people with disabilities navigated the flood. The team evaluated the strengths of the response and developed suggestions to be better prepared for future natural disasters.

“To make a difference, we must first understand the experiences from the perspectives of people who live that reality,” Copeland says. “Our work focused on the South Carolina floods, but we’ve been hopeful that the findings would be informational in all forms of disaster response and preparedness for people with varying disabilities, whether those disabilities are visible or invisible.”

The researchers had several ideas for areas of improvement, including disability awareness and emergency planning training for professionals and volunteers, strengthening or developing services to ensure equal access to all resources, improving communication and ways to access communication and services, and improved collaboration between people with disabilities and emergency response personnel.

The team is continuing its research, collecting data in subsequent natural disasters. The researchers also have worked with the Red Cross and other aid agencies to offer advice on responding to people with disabilities. Through their efforts, they have helped people with disabilities prepare for disasters and learn how to advocate for themselves in preparation for a natural disaster.

“People with differing abilities may have additional limitations to accessing information, and they may have trouble finding accessible means of housing and safety. Accessibility of shelters revealed itself as a challenge for folks,” she says. “With any challenge, it’s important to realize that awareness is always the first step.

“Until we’ve had an experience or walked a mile in one’s shoes, we don’t have the opportunity to understand an experience or what needs might be different or how those needs can be met. The takeaway is the need to heed the voices of lived experiences.”

A longer version of this story originally appeared in the Spring 2019 Breakthrough research magazine.