In the early morning of Jan. 6, 2005, a train collision in Graniteville, South Carolina, released deadly chlorine gas from a rail car, sending hundreds to the local emergency room. While most of the victims didn’t show obvious signs of trauma, many showed signs and symptoms of respiratory problems including shortness of breath, coughing, wheezing and eye/nose/throat irritation caused by the clouds of toxic gas, which was blamed for nine deaths and hundreds of injuries in the small Aiken County town. 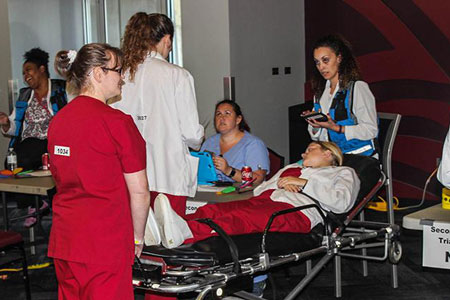 Nursing students and faculty participate in a drill to help better understand and prepare for a chemical mass casualty event.

The tragedy exposed the lack of diagnostic tools available to quickly identify and treat victims in the early stages of a chemical incident. That’s where Joan Culley, an associate professor in the College of Nursing, got involved.

Using grants from the National Institutes of Health and the National Library of Medicine, Culley led a team of University of South Carolina and Medical University of South Carolina researchers to study and improve the way patients are examined and treated in the aftermath of a chemical mass casualty event. The first grant took data from the Graniteville accident and mapped it against the triage tools used by first responders in the field and in hospital emergency rooms.

“It was not a good match. We found out that common methods used in triage don’t work in chemical accidents. Current triage methods are not accurate in identifying and prioritizing patients for treatment in chemical exposures,” Culley says. The accepted triage standards “would not have categorized these patients as critical nor have recognized that many signs and symptoms do not appear for eight hours after a chemical exposure.”

For example, she says, one of the victims in the Graniteville disaster was driven to the emergency room where he walked in on his own and was able to provide information about his condition. He died two hours later. “I’m not saying the triage algorithm might have saved his life; his lungs were too damaged. But he looked reasonably OK when first seen in the emergency room,” she says.

Culley and her research team, which included an industrial hygienist, a bioinformatics computer engineer, a computer scientist, a biostatistician, a chronic disease and environmental epidemiologist, and experts in databases and public health, looked at the most significant signs the victims exhibited and then built an algorithm to quickly determine if they were exposed to chemicals. Based on five or six questions, the app would determine the appropriate triage category. A nurse could then pull up that information, observe the patient and make a final determination of the triage category.

“We tested it and found out we could certainly be more efficient, and we could be precise and accurate in how we triage our patients,” she says. “The whole purpose was to develop a prototype to prove you can develop algorithms that improve efficiency and provide decision support to the medical team. It’s especially important during a chaotic time in an emergency room, but we can also develop algorithms for stroke, food poisonings and heart attacks.”

The next step in the grant was to design a prototype to see if this method of triage would work in a mass casualty situation. Culley and her fellow researchers spent three years developing a simulation of the aftermath of a chlorine leak, a mock event held at Williams-Brice Stadium with more than 500 participants. University students were trained to play the roles of victims, while nurses from the community and the faculty worked as triage providers. Representatives from the S.C. Department of Health and Environmental Control, the Centers for Disease Control, other environmental health and safety representatives, police and firefighters performed activities from decontaminating volunteers in the parking lot to interviewing and treating victims.

The data from the simulation, including treatments, lessons learned and other recommendations, has been collected and is available to other researchers. It also has been published in journals and presented at conferences.

“It was very rewarding to do something like that,” Culley says. “We have advanced the science to see new ways to handle a mass casualty.”

A version of this story originally appeared in the Spring 2019 Breakthrough research magazine.