Holidays are made for passing on traditions and recipes from generation to generation. When my family gathers together this year, I’m bringing a dessert made from a recipe that reflects the traditions of South Carolina cooks from the early 20th century.

To find my new — or maybe I should say "old" — recipe, I went on a quest through the digital collection of South Carolina Historical Cookbooks and stumbled across The Spartanburg Cook Book. The 1917 publication was filled with recipes for everything from sausage stuffing and meatballs to afternoon tea cookies and chocolate walnut wafers. I settled on an apple crisp because nothing screams fall like sugary, cinnamon-laced baked apples. 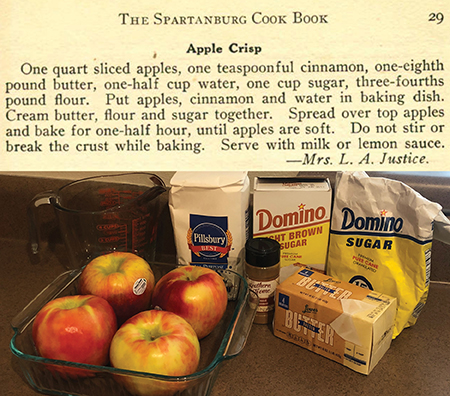 This recipe for apple crisp from The Spartanburg  Cook Book has only a few simple ingredients.

Before trying it out on my family, I decided to do a taste test at the office. Turns out, people love apple crisp. The history alone was enough to draw a crowd, and my test run soon disappeared as people tried it. The ingredients were simple — three large honey crisp apples, sugar, flour, butter, water and cinnamon — to create fall in a bite. I added a sprinkle of brown sugar to the top for a little something extra.

David Shields, a Carolina distinguished professor in the College of Arts and Sciences, explains that Lowcountry cooking dominated the print world of South Carolina cooking until the 1917 publication of The Spartanburg Cook Book.

“For the first time the wealth of dishes and characteristic ingredients of Carolina's hill country received an airing — items such as Palestine (Jerusalem Artichoke) Soup, Chestnut Consommé and Salsify Soup in the soup section exemplify the Carolina cookery that had not appeared before,” Shields says. “As a collection of offerings from members of the Methodist church, the recipes reflect the practice of a community rather than the expertise of a single author or culinary savant.“

The South Caroliniana Library is home to the South Carolina Historical Cookbooks collection of publications from 1832 to 1921. The collection covers many parts of the state including, but not limited to, Kingstree, Spartanburg, Sumter and Charleston. The cookbooks consist of a variety of recipes such as pickled oysters, rice cakes, sweet desserts and even some home-spun medical and economic advice.

The collection is a valuable resource for research but also of interest to anyone who is just curious about local dishes and cooking traditions or to cooks like who just want to add something new to their holiday repertoire. I fall into the latter category, and I’m looking forward to sharing my apple crisp this holiday season. It may become a new family tradition, pulled from recipes of the past.

Find your own new-old recipes for the holidays in the South Carolina Historical Cookbooks collection online through University Libraries.

Annika Dahlgren is a graduate student intern in the Office of Communications and Public Affairs. A native of Bethlehem, Pennsylvania, she earned a bachelor's degree and is working on a master's degree in communications at UofSC.