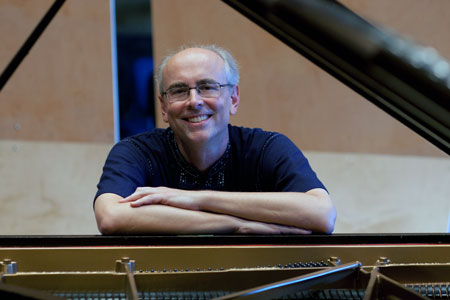 "The paths in music many of our students will take are going to be radically different than their professors' in many cases, because society is changing so rapidly, technology developing, the boundaries between musical genres are dissolving." — Phillip Bush

While many of us were eyeing the end of the semester, University of South Carolina music professor Phillip Bush was eyeing his piano — gearing up for an early December trip to Paris, where he performed with acclaimed American composer Philip Glass.

We caught up with Bush — a graduate of the Peabody Conservatory and School of Music faculty since 2012 — to find out how the tour went and how his performance experience manifests itself in the classroom.

You’ve recently been in Paris performing with the American composer Philip Glass. For those who might not be familiar with him, can you explain why he’s considered so important?

In an era when classical music has become somewhat marginalized in American culture at large, Glass is perhaps the one modern composer whose name at least rings a bell with a pretty substantial portion of the general public. Just to use one example, it's impossible to imagine any other living classical composer anywhere in the world who would be considered worthy of lampooning on South Park, as Philip was some years back.

Aside from the fame per se, what's really significant about Glass' work is that he is one of the two or three most important creators of the musical style that has come to be known as minimalism. Love his music or hate it, there's no question that he established his own readily identifiable style. Even if you don't think you've heard any Philip Glass, chances are you actually have heard his music, perhaps in films, or at least you've heard one of his many imitators in the commercial, pop, and film music industries.

How did this opportunity come about?

I actually have a very long association with Philip and his ensemble. Soon after I finished school and moved to New York, I was asked to audition to join the ensemble for a tour they were about to do, with the music for the film Koyaanisqatsi played live along with the movie. I got the gig and that was my first tour with the band, in the fall of 1987. I've since played that film many times, along with many other of Philip's projects, especially during the next 20 years or so, all over the world from the Sydney Opera House to the Acropolis in Athens.

However, I'd kind of let go of that gig in recent years as I moved away from New York and other things — family, academic career, pursuing solo projects — took precedence in my life. In fact, I had not played with the Glass Ensemble since 2006. But keyboardist and percussionist Mick Rossi, who also has been in Paul Simon's band for years, called in the spring and told me that they were doing these film scores in Paris in December and that he wanted to go back to playing percussion for these concerts, and asked if I would consider coming in to play the keyboard parts I had originally played for these shows. It came out of the blue, and I happily said, “Absolutely.”

What was on the program? How did you prepare?

We did three consecutive nights in Paris of the Qatsi Trilogy. These are films, directed and created by Godfrey Reggio, that consist only of imagery, no dialogue or plot. They were created with the idea that they would exist in close tandem with the music that Philip Glass wrote for them. The titles all come from words in the Hopi language: Koyaanisqatsi (life out of balance); Powaqqatsi (life in transformation); and Naqoyqatsi (life as war). The movies are projected on a giant screen above and behind us and we play live with the films.

I knew that I was just "re-plugging in" to a band that had already done these innumerable times and that therefore they were not going to have much rehearsal time scheduled. So I practiced at home on the piano, with the movies running on my laptop. In a situation like this you just have to come to the gig absolutely 100 percent solid. Luckily I was surprised how much I remembered from doing the shows in the past even though it had been years since playing them.

We performed at the Philharmonie de Paris, one of the major classical large halls in Paris, which is also the home base for the Orchestre de Paris. It's a beautiful hall. Koyaanisqatsi, still the most popular, and in my opinion the best of the three, sold out weeks in advance. But the other two shows were also almost completely full; I saw very few empty seats.

This great attendance was especially remarkable considering that there was a big strike going on which shut down the subway and many buses as well. I had friends come to the shows who had to spend two hours getting there in some cases. So, it's sort of inspiring that so many people showed such determination to be there. Our hotel was, thankfully, just across the street from the hall.

You play such a wide range of repertoire and have such a wide experience in performance and recording. How does that experience help you in teaching and preparing students for careers in music?

Things are changing so rapidly in the music world that a teacher has to be careful about recommending this or that specific career track within the field. The paths in music many of our students will take are going to be radically different than their professors' in many cases, because society is changing so rapidly, technology developing, the boundaries between musical genres are dissolving.

But a general principle we talk about at the School of Music is the importance of developing a diverse array of skills — musical skills to be sure, but also the skill to be creative and open-minded about how one thinks about and develops a professional life in music.

Pianists, who labor often in their isolated practice rooms, need particularly to be reminded about the importance of making musical and professional connections. I had no idea when I was in school that my career would take exactly the path it did take, but I played with this person who recommended me to that person who introduced me to another person, and so forth. Anything that I've ever done in music has basically been because of that sort of chain of events. Those lessons, I'm sure, are equally applicable to other fields, certainly to the business world.