Getting smart about artificial intelligence

Alumnus seeks to make us all ‘conscientious consumers’ of artificial intelligence

Flashback: In October 2015, computer science majors and best friends Blakeley Payne (then, Hoffman) and Maribeth Bottorff are hanging out at Bottorff’s apartment. Payne watches Bottorff submit her resume to Twitter. 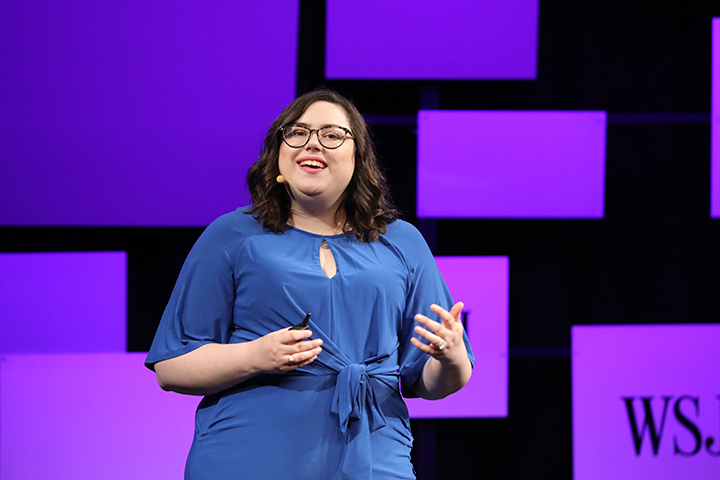 Payne discusses her research at the 2019 Future of Everything Festival. Photo courtesy of the Wall Street Journal.

Less than 24 hours later, Bottorff gets an email from Twitter telling her she isn’t a good fit. Flummoxed, the friends start investigating. How could Bottorff, at the top of her class and with proven leadership experience, be rejected so quickly? Their hunch — that Twitter’s algorithm for potential employees didn’t recognize certain words in Bottorff’s resume — proved valid.

Finding a cache of information about how algorithms could be biased and cause inequity, Payne became angry and disillusioned about her field of study. But she also found her next step. After graduating from the Honors College with degrees in computer science and math in 2017, she moved to Cambridge, Massachusetts, to study ethics in artificial intelligence at the MIT Media Lab.

“Fairness and social justice topics have always been closest to my heart,” says Payne, an Irmo, South Carolina, native. “I became interested in how technology could help everyone and not just a small group of people. I wanted a broad education about how social systems work and to understand how people interact with technology and to talk about it to figure out how to build the most helpful thing.”

It didn’t take long for her to find her focus group. Disturbed when her colleagues’ research found that many children believe their devices are smarter than they are, Payne zeroed in on middle-schoolers to begin challenging that mindset. Old enough to make nuanced moral decisions and young enough to be excited about their first smartphones, tweens were ideal for the curriculum and workshop Payne designed. She taught “AI & Ethics” to more than 200 middle-schoolers during a three-day period in Pittsburgh, Pennsylvania, and to 28 more during a weeklong workshop in Boston.

Learning that age group eschews Facebook, teacher and students studied YouTube. Payne was pleased to learn her students recognized YouTube as a monopoly that wants to make money through advertising as much or more than present entertaining and educational videos. Together, the students devised ways to make YouTube better and more accountable for its users and stakeholders, including their own age group. As Payne puts it, she’s teaching children to be “conscientious consumers and designers of AI.” It’s vital work in the 21st century, she says.

“There are people who can’t get jobs, can’t get loans, people whose whole livelihoods are on the line because of this technology,” she says. “My colleague at the Media Lab, Joy Boulamwini, showed that facial recognition technology — the kind that unlocks your iPhone but also is used in customs at airports or by the police — is nearly perfect in identifying lighter faces, but is 35 percent less accurate in identifying darker, female faces. This disparity has led to issues of false arrest in the United States.”

We just have to imagine a different world. At the end of the day, my life will be measured by how I helped others. I've been tested on that here.

Payne’s work brought her to the attention of the Wall Street Journal, which invited her to speak at its Future of Everything Festival in New York in May. In her talk, Payne detailed her experiences with Bottorff and her students. She emphasized that algorithms are opinions, not facts. And she quoted her mentor, Ethan Zuckerman, who said, “Once you stop seeing technology as neutral, you can easily wade into the valley of depression around the consequences of technology.”

“I’ve been there,” Payne says. “And I know for sure that I don’t want my students to be there.”

Her Wall Street Journal talk, for which she wrote 10 to 15 drafts and practiced a lot, affirmed the importance of her research.

“It was a good feeling to get off the stage and have people say, ‘You really changed the way I think about AI.’ It was good to know I could have this input on people’s lives if I put this work into it,” she says.

But her greatest reward may be realizing she can have a difficult conversation with all kinds of people.

“It’s really important to me to stand up and advocate for what I believe in and to advocate for people who haven’t had the same opportunities and privileges that I have had,” she says. “People of different backgrounds will push back and say, ‘This is the business model, this is the way things are, I can’t imagine a different world.’ We just have to imagine a different world. At the end of the day, my life will be measured by how I helped others. I’ve been tested on that here.”

Payne says the University of South Carolina, the Carolinian Creed and the Honors College prepared her well. Ed Munn Sanchez’ philosophy course on authenticity is with her still.

“There was a moment when he said, ‘The only thing I care about and can never get back is my time. That’s my most precious and valuable asset.’ I’ve done a lot of soul searching since taking that class,” she says. “Am I making sure I’m happy and satisfied with my life and making sure my time serves more than me?”

Payne will earn her master’s degree in media arts and sciences this semester. That’s a little more than two years after she moved to Boston, a jolt for someone who grew up in a town “where there were cows everywhere.” Now she’s ready to focus on science communication around AI.