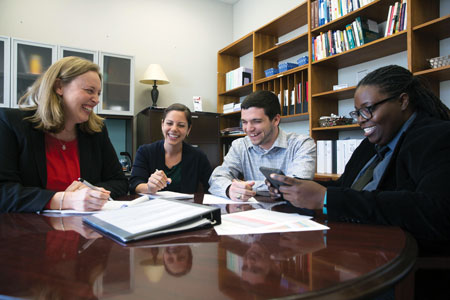 USC Times actually started its year-end issue with the university’s new Advising Center (pictured above) which opened its doors this spring.

A is for alphabet, at least according to USC Times. To help close out 2016, the University of South Carolina’s monthly magazine for faculty and staff devoted its entire December issue to the ABCs of 2016 — with each letter representing a different accomplishment, announcement or notable arrival from the past year.

Boom! That’s right, Gamecock football came on strong in 2016, as head coach Will Muschamp racked up six wins and an invitation to the Birmingham Bowl in his first season in garnet and black. Muschamp’s Gamecocks, led by true freshman quarterback Jack Bentley, will take on the University of South Florida Dec. 29. 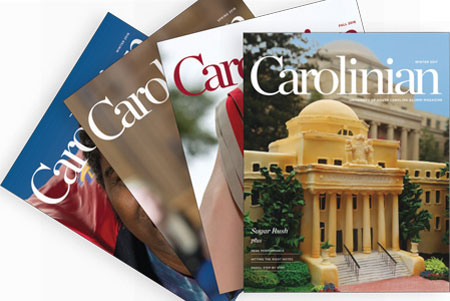 Physical therapist Carmel Turner received her doctorate from the Arnold School of Public Health in 2005. The alumna spends her spare time, however, designing and decorating elaborate cakes like the one that graced the Winter 2017 issue of Carolinian magazine. In December, Turner also competed on the Food Network show, Cake Wars.

D is for deans, specifically Stephen J. Cutler (College of Pharmacy) and Jon Pederson (College of Education), both of whom joined the university in July. Along with Lacy Ford, who was named dean of the College of Arts & Sciences this year, the university’s new deans are helping to usher in a new era of leadership at Carolina.

Looking for E? Scroll down.

First Folio, anyone? In April, the Ernest F. Hollings Special Collections Library hosted the traveling exhibit “First Folio! The Book that Gave Us Shakespeare.” Between student productions of “The Tempest” at Drayton Hall, a production of associate professor of theater Robert Richmond’s “The Gravediggers Tale” at Longstreet Theatre and the First Folio exhibit itself, it seemed for a time that all of campus was a stage, and we were merely— 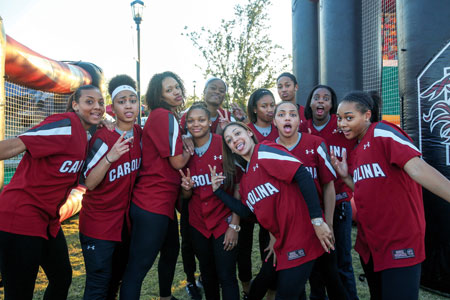 H is for hoops. The women’s basketball team has gotten better every year under head coach Dawn Staley. The Gamecocks finished the 2015-16 season 16-0 in Southeastern Conference play for the first time in school history and just the second time in SEC history.

The IBM Innovation Center opened this year, providing a base of operations for the university’s Center for Applied Information and Advanced Analytics. Among other things, the center brings together university and industry researchers to study cognitive systems and the burgeoning Internet of Things.

J is for Jory Fleming, one of the most decorated students in university history. Already a Hollings Scholar, a Goldwater Scholar and a Truman Scholar, Jory, a geography and marine sciences major, added yet another feather to his cap in 2016 — the prestigious Rhodes Scholarship, which will allow him to spend two years at Oxford University in England after he graduates from Carolina.

K is for kicks, and if you’ve been paying attention to women’s soccer lately, you know why. Undefeated in the regular season, coach Shelley Smith’s team made it all the way to the NCAA quarterfinals in November and finished 2016 ranked No. 5 in the nation. 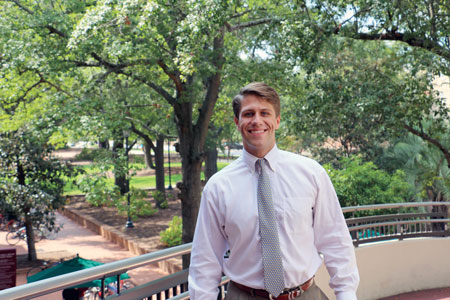 M is for Michael — Parks, that is. As student body president, Michael is determined to increase student engagement and raise awareness about student government. He’s also working hard to promote the “It’s on Us” campaign against sexual assault on campus.

USC Times had a tough time with the letter L. Lara Lomicka Anderson, a professor of French and applied linguistics, took over as principal of the Preston living-learning community in 2016 — and that’s a lot of Ls. Luckily, Lara’s commitment to lifelong learning made the decision pretty simple, apart from the headline.

No. 1 in international business, No. 49 on U.S. News & World Report’s list of best public universities, 47 nationally ranked academic programs — numbers don’t lie, and the university posted some impressive ones in 2016.

For literary types, it doesn’t get much better than The Open Book free public reading and lecture series, which celebrated its five-year anniversary in the spring. Sponsored by the College of Arts & Sciences, the 2016 series brought Jenny Offill, Anthony Doerr, Celeste Ng, Nuruddin Farah and Paul Auster to campus. For information about the 2017 lineup, visit the Open Book website. 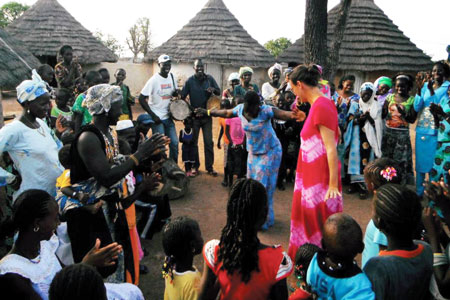 The university began preparing the next generation of Peace Corps volunteers through the new Peace Corps Prep program in the fall. The program combines coursework, hands-on experience, professional development and leadership opportunities and promotes intercultural competence.

Quick — that may be the best way to describe the university’s response to the floods that inundated the Palmetto State in October 2015. Just a week after the Office of the Vice President for Research asked faculty to submit research proposals to study various aspects of the flood, 34 research projects received seed funding to study such topics as social media communication during the floods, dam breach, economic impact of the disaster, river erosion and more.

Speaking of research, 2016 was a record year for funding and sponsored awards, which surpassed the $250 million mark for the first time. Among the high-dollar grants this year were a $4 million National Science Foundation grant awarded to chemical engineering professor J.R. Regalbuto and colleagues for the exploration of agricultural waste recycling, and $6 million in grants from the National Institute of Mental Health obtained by psychology professor Jane Roberts to study developmental trajectories of disorders such as autism and Fragile X Syndrome.

And let’s not forget stroke research. 2016 was also a great year for Julius Fridriksson (communication sciences and disorders), Souvik Sen (neurology) and Chris Rorden (neuroimaging), whose team announced an $11.1 million grant from the National Institutes of Health to expand their research on stroke and aphasia. 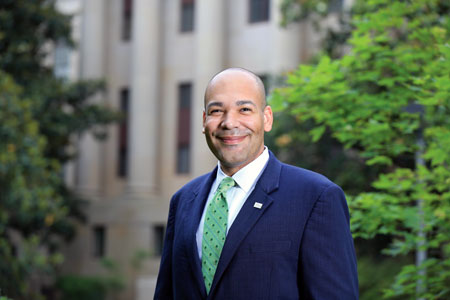 T is for Tommy Preston was elected student body president in 2006. In 2016, he returned to serve as president of the My Carolina Alumni Association. In his day job, Preston is Boeing’s director of national strategy and engagement for South Carolina.

Hardhats and jackhammers were seemingly everywhere in 2016, with new building and renovation projects underway across campus. Among this year’s campus improvements were a new soccer building, renovations to Legare-Pinckney College and classroom and auditorium updates in several buildings. In 2017, the university will welcome the new law school building and a new student health center. That’s right, U is for Under Construction.

And V is for Volunteer. For the fiscal year ending June 30, more than 28,000 students, faculty and staff participated in volunteer activities, according to the Office of Student Affairs and Academic Support. Total service hours amounted to 527,651.73. Monetary donations, meanwhile, totaled $1,634,406.34.

Every spring and fall semester a dozen or so of the brightest, most ambitious students in South Carolina journey to the nation’s capital to intern in congressional offices, at government agencies and anywhere else where they can learn the about the mechanisms of democracy. The Washington Semester, which is operated through the South Carolina Honors College but open to college students throughout the state, celebrated its 25th anniversary in October. As a tribute, USC Times spoke to several program alumni and a couple of current participant that month. If you missed their stories, look for them now on @UofSCToday. 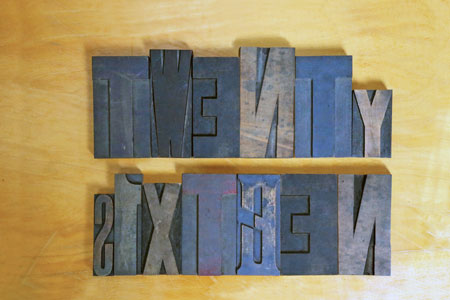 USC Times featured a lot of great stories in 2016, but every now and then, the editor slipped up. In the spirit of full, self-deprecating disclosure, the letter E was devoted to the five most embarrassingly funny errors to make the paper’s pages in 2016. You won’t find them here, though. Faculty and staff can enjoy a chuckle by consulting in the actual print publication, which arrived in campus mailboxes in mid-December.

X marks the spot. Chester DePratter, a research professor at the South Carolina Institute of Archaeology and Anthropology, has been exploring the Spanish settlement of Santa Elena — situated on Parris Island in Beaufort County — for decades. This summer, he and University of Georgia archaeologist Victor Thompson discovered the site of the long-lost fort San Marcos, built in 1577 to protect Santa Elena from Native American attacks. “It’s an important Spanish colonial site,” said DePratter. “It was the northernmost Spanish settlement. It was holding the frontier, essentially.”

Y is for the year ahead, which was the focus of the Darla Moore School of Business’s 36th Annual Economic Outlook Conference Dec. 8. During the conference, Doug Woodward, director of research, and Joseph Von Nessen, a research economist, presented their 2017 economic forecast to more than 150 of the state’s business and community leaders. Among other findings, the two predict the job market in South Carolina to grow by 2.6 percent.

And now you know your ABCs, including Z, which USC Times used to announce that there are “Zero Issues Left” in 2016. USC Times will be back in 2017, though, as will @UofSC Today. Until then, happy holidays.