Advertising major puts passion for writing to use 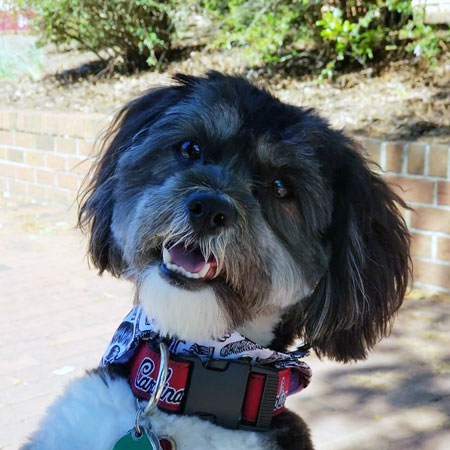 Sarah Waldrop says a day volunteering at Give4Garnet, where she met women's basketball head coach Dawn Staley and her dog Champ, as well as other university celebrities, was one of her favorite memories of her time at UofSC.

When Sarah Waldrop was picking a college, she initially set her sights on South Carolina’s other big state school, the one up near Greenville. In fact, she was already seeing orange. But her brother was a rising senior at the University of South Carolina, loved the garnet and black and convinced her to reconsider.

And then she took a campus tour and found herself on the university’s historic Horseshoe.

“I had kind of a moment when I walked onto the Horseshoe and it dawned on me just how much I loved it,” she says. “It just felt right.”

Three years later, Waldrop’s feeling would be confirmed when she wandered onto Greene Street during the annual Give4Garnet fundraising event, which prior to that day she had never even heard of.

“I wound up an accidental day-long volunteer for the photo booth and had the true pleasure of meeting George Rogers, Marcus Lattimore, half of the university's football team, Sir Big Spur, Dawn Staley and her dog Champ, and President Pastides and his wife, Patricia.”

“It was incredible. I got to wear George Rogers’ Super Bowl ring,” she adds with a laugh. “He has really big fingers!”

But Waldrop’s path from freshman orientation to that memorable afternoon on Greene Street was hardly a straight line. Initially a biology major with med school ambitions, she realized early on that she would be happier in another field.

“I’ve always had a passion for writing so I decided to give advertising a try, and I absolutely fell in love with it,” she says.

Asked to explain, she points to the instruction but also to her instructors — and to everyone else who eased her transition from hard science to mass communications.

I had kind of a moment when I walked onto the Horseshoe and it dawned on me just how much I loved it. It just felt right.

“It was really the people in the School of Journalism,” she says. “While there’s competition with your classmates, we did a lot of group projects so we learned to work together as teams. It was a very encouraging environment, and the people in the school were just so absolutely kind to me.”

She’s quick with the shoutouts, too. She credits her academic adviser, Art Farlowe, and instructor Marcia Purday, in particular, for lifting her up when she needed it most.

“Oh my gosh, Art Farlowe was my cheerleader, just the most precious human being. When I first came to the journalism school, he made it easy, seamless and painless,” she says. “And professor Purday took me under her wing.  She put me in contact with the United Way and got me volunteering. But she was also my professor when my dad died. I would sit in her office and talk to her about life, not just about projects. She was absolutely amazing.”

While Waldrop’s plans to parlay her experience with the United Way of the Midlands into a job have been put on hold due to the COVID-19 pandemic, she’s putting her education to work in the meantime as a freelancer.

“That’s one cool thing about the advertising major: You don’t have to work in someone else’s lab or someone else’s office,” she says. “Right now, I’m helping one of my neighbors start her online business. I’m using what I learned in school, but I’m also learning new things. And I’m getting to help my community, which is really fun for me and rewarding.”

Indeed, that’s the other big takeaway from Waldrop’s time at Carolina. She made countless memories during her college career, but the thing she will miss most is the sense of community, which crystalized for her that day on Greene Street in 2018.

“I feel like Give4Garnet is the embodiment of the Carolina spirit,” she says. “Everyone was so happy. We had President Pastides and his wife out there, taking pictures with everybody, strangers talking to each other, former athletes and current students — it was just so exciting to be out on Greene Street on a beautiful day, meeting all these awesome Carolina icons.