The killing of an unarmed black jogger by white residents is shocking, but it should come as no surprise. Law professor Seth Stoughton writes for The Conversation that if anything, Ahmaud Arbery’s death in Georgia on Feb. 23 was predictable: the latest tragic example of the fatal consequences that can occur when private citizens seek to take the law into their own hands.

The killing of an unarmed black jogger by white residents who assumed he was up to no good is shocking, but it should come as no surprise.

If anything, Ahmaud Arbery’s death in Georgia on Feb. 23 was predictable: the latest tragic example of the fatal consequences that can occur when private citizens seek to take the law into their own hands.

As a law professor and former police officer, what concerns me is not just that the men who killed Arbery may have thought that their attempted apprehension was legally sanctioned, but that they they would have had good reason to believe that. Most states still retain outdated laws that protect would-be vigilantes.

So-called “citizen’s arrest” laws, which allow private individuals to apprehend an alleged wrongdoer, have been around for centuries. Such laws protect people from civil or criminal liability in the event they “arrest” someone.

In theory, that makes sense. Public safety is everyone’s responsibility, after all. In practice, however, citizen’s arrest doctrines have set the stage for tragic, unnecessary and avoidable confrontations and deaths.

Modern citizen’s arrest rules can be traced back to 1285, when England’s Statute of Winchester directed that citizens “not spare any nor conceal any felonies” and commanded that citizens bring “fresh suit” – prosecute – whenever they see “robberies and felonies committed.”

Back then, there was no “law enforcement” as we understand it today – no cops, no prosecutors. It was largely left to private citizens to apprehend and prosecute felons.

Prior to the development of professionalized police agencies in the mid- to late-1800s, there was no particular legal distinction between arrests made by private citizens and those made by public officials.

In English cities and larger towns, able-bodied men were expected to take generally unpaid shifts patrolling as night watchmen. Watchmen were often conscripted, and citizens of means could hire someone to serve on their behalf, resulting in a dubious dedication to duty. 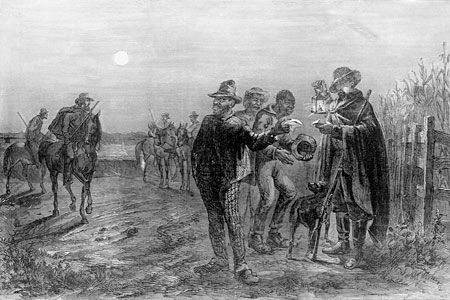 A patrolman looking over the passes of plantation slaves. Corbis via Getty Images

This practice extended beyond England to its colonies. An account published in the New York Gazette in the mid-18th century described night watchmen as “a parcel of idle, drinking, vigilant Snorers, who never quelled any nocturnal Tumult in their Lives.”

In the mid-1600s, the slave codes of the colonial American South declared that controlling the enslaved population was a matter of public responsibility – the “public” here being exclusively white men. Paid and volunteer militiamen were tasked with, as the author Kristian Williams has noted, “making regular patrols to catch runaways, prevent slave gatherings, search slave quarters … and generally intimidate the black population.”

These militiamen did little or nothing to address crime by whites, especially crimes against enslaved or free blacks.

Today more than 18,000 local, state and federal agencies provide police services in the U.S. But citizen’s arrest lives on in the form of a patchwork of statutes and common law doctrines.

Most states have “shopkeeper’s privilege” laws that provide a defense for business owners and employees who arrest someone for theft so long as they have probable cause. Resisting such an arrest is a crime in some states. Private security guards, similarly, may be authorized to make arrests, at least on the property they are hired to protect. And when bounty hunters capture someone who has jumped bail, the Supreme Court has said the arrest “is likened to the rearrest by the sheriff of an escaping prisoner.”

Those who are not a shopkeeper, security guard or bounty hunter may still be able to effect an arrest under more generic citizen’s arrest rules.

In many states, for example, an officer can make arrests for offenses classified as misdemeanors – minor crimes typically punishable by up to a year in jail – but a private citizen cannot. In other states, including Georgia, a private citizen may make an arrest only if they witness or have firsthand knowledge of an offense. And in some states, an individual may only be able to invoke “citizen’s arrest” as a defense to civil or criminal liability if the person they arrested actually committed an offense, while officers are protected if they had probable cause.

But in some ways, private actors have even more leeway to make arrests and use force than law officers because the constitutional rules that regulate searches, seizures, and interrogations do not apply when “a private party … commits the offending act.”

Citizens may have more authority to use force than law officers, too, depending on state law.

In South Carolina, a citizen can use deadly force to effect the nighttime arrest of someone who has US$1 of stolen property in their possession or who “flees when he is hailed” if the circumstances “raise just suspicion of his design to steal.”

If an officer in South Carolina did the same, he would likely run afoul of state law or the Fourth Amendment, which the Supreme Court has held requires probable cause “that the suspect poses a significant threat of death or serious physical injury.”

No one knows how many citizen’s arrests occur in the U.S. every year because the police are usually called and an officer processes the arrest, leaving little evidence of private involvement.

We do know, however, that private arrest authority is too often badly misused by those who believe their higher social status gives them authority over someone they perceive as having lower status. Frequently, this falls along racial lines, as seen in the detention of immigrants by militias at the U.S. border, the attitude of nightwatchmen in gated communities, and in situations like the Ahmaud Arbery case.

Gregory and Travis McMichael say they chased Arbery because they believed he was behind neighborhood burglaries. Arbery, of course, had committed no crime. He was just jogging.

And even if he had committed a burglary, the death would have still been the result of an unjustified act of vigilantism. As the Supreme Court has said, “It is not better that all felony suspects die than that they escape.” Remembering that as the U.S. considers reforming citizen’s arrest statutes may go a long way in preventing any further unnecessary deaths.