Hank Johnson was planning to interview for jobs in Tampa, Florida, during spring break. Then the coronavirus shut down the university and just about everything else around the country.

But the visual communications senior from Piedmont, South Carolina, is taking it all in stride. He’s had a few offers, and he knows he will continue on his path doing video, design or creative direction. It’s just the details that need to be worked out. 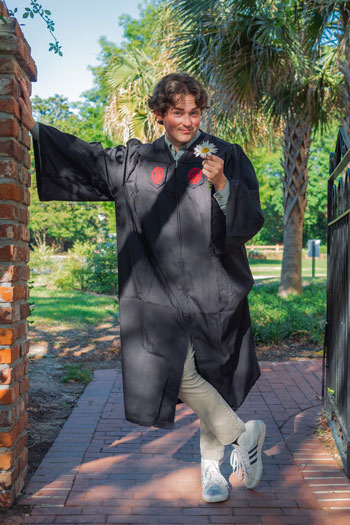 “I’ve always been a really big planner, and corona has really shifted my views on how I plan things. I’m a Plan A, Plan B, Plan C, if all else fails, repeat,” he says. “I’m just going with the flow right now.”

In the weeks leading up to finishing his classes and earning his degree, he put his visual skills to work – on himself.  He says he was sitting in his house in Columbia a few weeks before the end of the semester when he got the idea to take his own graduation photos.

“I was never planning on taking grad photos. I don’t like my picture being taken; I’d rather take pictures of other people,” Johnson says. “I was talking to an old friend, and she said she just went for her grad pictures.  I said, man, I want to be able to take grad pics now that I’m not able to. So why don’t I take them on my own? I have the resources, I have the equipment and I have the experience, let’s just go do it.”

He scouted locations on campus, set up the tripod and — with the help of a roommate who pressed the camera button when Johnson asked him to — he captured his own cap and gown image.

“In the absence of sweet, sweet freedom and the attendance of classes, I was able to take the precious yet forced-upon free time to put my major to the test and take my own grad photos,” he says.

He starting putting those visual skills to work early in his college career. After one semester at UofSC as an undecided business major, he switched the College of Information and Communications as a visual communications major. His freshman year, soon after he started working as a video intern for the university’s communications office, the men’s and women’s basketball teams made it to the Final Four, with the women’s team winning the national championship.

“It was perfect timing. It was March Madness and nobody expected us to go as far. Everybody was running to the (library) fountain.  I was able to run out with a camera, and make footage that ended up going on the national TV spot,” he says. “Just a couple clips of students rushing the fountain. It was a memorable thing."

In the absence of sweet, sweet freedom and the attendance of classes, I was able to take the precious yet forced-upon free time to put my major to the test and take my own grad photos.

He said those video skills, along with his “creative ability and creative reach” were stoked by his professors in the School of Journalism and Mass Communications. And, even though his final semester on campus was shortened by the pandemic, he’s prepared for the next step.

“I had to postpone a lot of things, but I’m better off than a lot of people right now. I’m realize I’m not suffering as much as other people. I’ve had my education. I got my degree. I’m ready to move to the next thing.”