Editor’s note: This story was written prior to the onset of the COVID-19 pandemic. In accordance with Massachusetts guidelines, the research facility remains closed as they begin the planning process for an orderly and safe transition back to normal operations.

It’s just another day at the beach for former University of South Carolina Capstone Scholar and NOAA Hollings Scholar Erin McParland. Her everyday life as a postdoctoral scholar and research fellow at Woods Hole Oceanographic Institution in Woods Hole, Massachusetts, is spent studying dissolved organic matter in the ocean — which stores just as much carbon as the earth’s atmosphere. 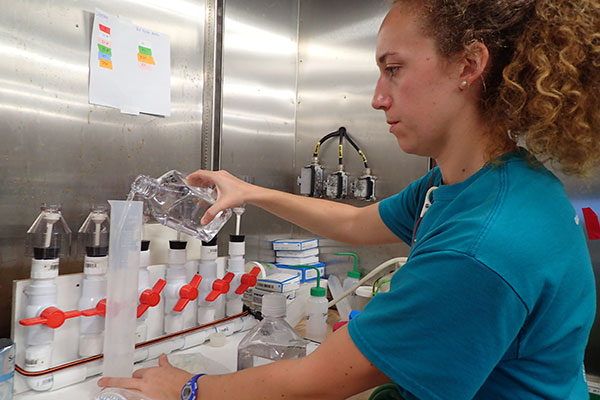 Marine phytoplankton — the microscopic plants of the ocean — breathe in carbon dioxide and produce half of the world’s oxygen. In the process, they release a variety of compounds into the water.

As part of her job as a research fellow at Woods Hole, McParland measures the compounds using sophisticated mass-spectrometers, a technology originally developed for use in the medical field.

“It’s very cool to apply this new technology to the ocean and measure the cycling of thousands of different compounds,” says McParland, a 2013 marine science graduate from the College of Arts and Sciences and a 2011 Hollings Scholar who minored in chemistry at UofSC.

By studying the pool of compounds, McParland and other researchers ultimately hope to determine whether the carbon taken in by phytoplankton remains at the surface of the water or is exported to the deep ocean.

The work McParland is doing at Woods Hole Oceanographic Institution builds upon the research she started while earning her doctorate.

“After graduating from UofSC, I completed my doctorate in marine and environmental biology at the University of Southern California — the other USC.” McParland says. “For my thesis there, I studied phytoplankton to understand why they produce a climatically active sulfur compound called DMSP.”

DMSP is known as the anti-greenhouse gas. When it enters the atmosphere, it is oxidized to form cloud seeds which promote the formation of clouds and thus block sunlight radiation.

“In my Ph.D. I measured just this one sulfur compound, whereas at the institution I am learning methods to measure hundreds of individual compounds,” McParland says. 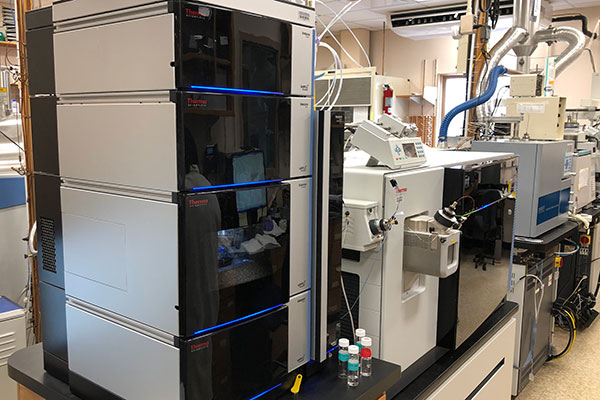 Although she was involved in undergraduate research early in her academic career at UofSC, McParland credits her Hollings scholarship for broadening her marine science perspective and helping her understand how research is conducted in federal labs.

“In most ways it’s very similar to academic research, but the study questions are more goal oriented, leading to a direct connection between the research and the end result so it can be turned into policy action,” she says.

The Hollings Scholarship was good preparation for her doctoral fellowship as well. McParland went on to earn the National Defense Science and Engineering Graduate Fellowship, which funded most of her Ph.D.

Administered by the National Oceanic and Atmospheric Administration, the NOAA Hollings Undergraduate Scholarship annually selects the most promising students in the nation interested in ocean or atmospheric sciences and introduces then to the mission of NOAA, its research and our nation’s long history of oceanic and atmospheric stewardship.

Hollings Scholars go on to become scientists, policymakers and educators in the U.S. oceanic and atmospheric workforce.

“Hollings Scholars have dedicated their careers to solving the complex problems of policy, science and education and are making our world a better place through their work,” says Novella Beskid, assistant dean, National Fellowships and Scholar Programs.

McParland is no exception. She plans to parlay her Hollings experience and the research she’s doing now into a career in education.

“In 10 years, I hope to be a professor in an oceanography department,” she says. “I want to recruit a diverse group of scientists who are interested in understanding how the biogeochemical cycles of marine microbes will adapt to future oceans.”

Apply, apply, apply. It never hurts to apply, and never let yourself doubt your qualifications.

The scholarship is named for Ernest F. “Fritz” Hollings,  a longtime U.S. senator who represented the Palmetto State. In the 1970s, he played a major role in the passage of environmental laws and in the creation of NOAA. In 2005, the scholarship was established in his honor.

South Carolina’s highly regarded marine science program is always well represented in the annual cohort of Hollings awardees nationwide. In the 15 years since the program’s inception, 56 UofSC students have been named Hollings Scholars, earning the university a spot as one of the top three Hollings Scholars producers in the nation.

The scholarship provides up to $9,500 of academic assistance per school year for full-time study during the student’s junior and senior years. A required 10-week paid summer internship including travel and living expenses is also included, as well as funding to present the scholar’s NOAA research project at two national scientific conferences.

Hollings Scholars are helped through the application process by the university’s National Fellowships and Scholar Programs. National fellowships advising supports scholars before, during and after they receive their awards.

“I think the NFSP is amazing,” McParland says. “Throughout the process of applying we workshopped my application together, and during the award they always checked in to see how things were going. I am now seven years post grad and still hear from the NFSP often and always love to catch up.”

When asked what advice she would give to current UofSC students interested in a scholarship or fellowship, McParland says, “Apply, apply, apply. It never hurts to apply, and never let yourself doubt your qualifications. The application process is an awesome way to start thinking about what comes after UofSC and if you don’t get the first one, just build upon that application for the next one.”