When Cole Falkenstine was a child in a small town outside of Baltimore, Maryland, he watched Surviving the Cut, a documentary about the training regimens of elite military forces. He remembers observing the difficult training programs and wondering if he could measure up. 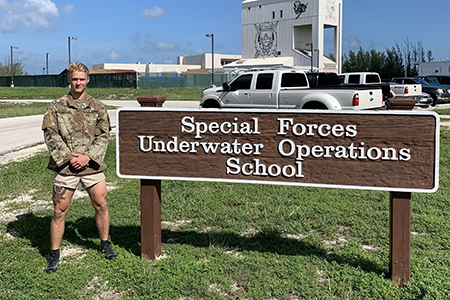 Turns out, he could.

The University of South Carolina junior recently graduated from the U.S. Army’s prestigious Combat Diving Supervisor Course. He was the first UofSC Army ROTC cadet to take the course, scoring a 94 percent on the final exam.

"Only the very best in the entire Army could have accomplished what Cole accomplished," says UofSC President Bob Caslen, a retired Army officer. “This is one of the toughest schools in the Army, if not the toughest.”

Falkenstine, a business major with a minor in military science, first heard about the Army’s diving courses during his freshman year from professor Anthony Gentile.

"I got the feeling that he was the type of soldier that would not quit no matter how difficult things got,” says Gentile, who teaches military science in the College of Arts and Sciences. “He is always hungry for more training, education and challenges."

In 2019, Falkenstine completed a seven-week Combat Diver Qualification Course. He performed so well at the qualification course that the Army invited him back to attend the supervisor course, preparing him to oversee combat dive operations.

Water is a great equalizer. Water does not care who you are. It is more of a mental challenge, and some of the toughest people can't handle it.

In both courses, Falkenstine trained alongside Green Berets and other special forces members. Falkenstine says he feels humbled to be a part of an elite community and that there is an unmatched camaraderie among combat divers.

"You understand that these people are at the same caliber as you," he says. "You make history when you finish dive school and become a part of a forever brotherhood.”

In the supervisor course, Falkenstine pushed himself to do more than he thought was possible. Some of the basic aspects never got easier, but he grew in his ability to endure. His confidence flourished.

"Water is a great equalizer," he says."Water does not care who you are. It is more of a mental challenge, and some of the toughest people can't handle it."

"Falkenstine demonstrated a rare quality to persevere in conditions that challenge the most elite soldiers," Frketic says.

Building on his experiences with the dive courses, Falkenstine organized a club to help other ROTC cadets prepare for the Army’s special operations training programs, with Gentile as the adviser. They named it the Murphy Club, honoring Maj. Edward Murphy, the only UofSC Army ROTC cadet to later die in combat.

"We train hard and meet a few days of the week to prepare for military schools," he says. "This is an excellent opportunity to do more in terms of work ethic and learn how to be a good leader.”

Falkenstine believes leaders not only lead but also care for others and put their lives on the line.

“Leadership is about making the people around you better,” he says. "In the diver qualification course, you never dive alone, understanding that you are willing to put your life on the line for your buddy."

Academic excellence is at the heart of everything we do at the Darla Moore School of Business. As a top-ranked business program, we immerse our students in their chosen field, and offer a strong business core to prepare them for the global marketplace.