The University of South Carolina has the best Navy ROTC program in the country.

That recognition comes as no surprise to the midshipmen and alumni of the program that began at Carolina in 1940. And it comes as the result of hard work by a team of staffers and the university’s support for it and other military-affiliated programs on campus.

Officially, the Gamecock Battalion was recognized by the Department of Defense for exceptional performance as the Academic Year 2018-19 Host Educational Institutional Partnership Award recipient for the Navy. UofSC was chosen from nearly 500 colleges and universities that host ROTC units.

“This is a great way to recognize the contributions and the work that is being done at South Carolina as a team, not just the unit itself,” says Capt. Robert Osterhoudt, commanding officer of the Gamecock Battalion. “The support we are getting from the university and the team that prepare these men and women is phenomenal.”

Osterhoudt knows a little about being among the best in the Navy as a graduate of the elite Navy Fighter Weapons School, also known as TOPGUN. He came to UofSC in 2018 after 28 years as a naval flight officer, flying the F-14 Tomcat and FA-18F Super Hornet.

When we were freshmen, it was just show up on time, be in the right uniform and don’t mess up. By junior year, I was chosen as a physical training instructor and came up with exercises for the battalion.

“I always wanted to do one last job where I could have an impact on future generations,” he says. “I wanted to return to the roots and positively affect people who are starting from the beginning.”

Some of the key changes Osterhoudt has helped bring to UofSC’s NRTOC program is the living and learning community in Columbia Hall, making housing and other costs more affordable for out-of-state students and working with the Athletics Department and Department of Exercise Science to classify ROTC students as student-athletes with access to varsity athletic dining facilities and athletic training services.

“The way they perform physically is in line with Division I athletes. It’s just a different type of sport,” Osterhoudt says of his midshipmen. 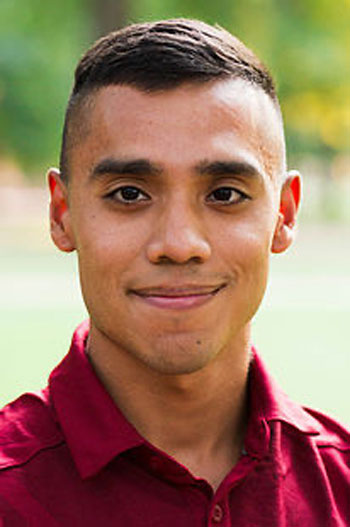 Marine 2nd Lt. Manuel Mata Hernandez, ’20 criminal justice and journalism, was a midshipman in the NROTC and served as a University Ambassador.

Marine 2nd Lt. Manuel Mata Hernandez, ’20 criminal justice and journalism, of Flowery Branch, Ga., took the advice of his older brother, who had enlisted in the Navy, and decided to go to college — the first in his family to do so — before beginning his military career.

“My middle brother and I were very similar and his viewpoint really helped me,” Mata Hernandez says. “His biggest advice was to go through college and grow a bit before joining the military. I would have that regular college experience with the military training and graduate as a commissioned officer.”

Mata Hernandez chose UofSC based on the NROTC program, but also because he could get a criminal justice degree.

He credits his time at UofSC, during which he also served as a University Ambassador, with preparing him for his post-graduation Marine Corps training at Quantico, Va. He is uncertain what his official “job” will be when he has finished that training, but he knows that UofSC and the NROTC program has prepared him well.

“Throughout our time there we would get assigned billets — that’s your job — physical training instructor or commander of a section,” Mata Hernandez says. “With those roles came different levels of responsibility. You knew what it meant to be in the military.

“When we were freshmen, it was just show up on time, be in the right uniform and don’t mess up. By junior year, I was chosen as a physical training instructor and came up with exercises for the battalion.”

He says the professionalism of the staff and his fellow NROTC members impressed him.

“We were 20-21 years old, still in college and we were having meetings with military staff who had been in five or 10 years,” he says. “That leadership development will really stick with me. The whole point of an officer is to make decisions and be a leader. The NROTC gave us opportunities to grow and make mistakes.”

Mata Hernandez says when he graduated, despite the COVID-19 health and safety restrictions, he still got to have an enlisted man give him his first salute. For that honor, he chose his older brother who had transitioned from active duty to the Navy Reserves.

Jodi Salter, interim director of external relations and ROTC liaison for the College of Arts and Sciences, began working with the ROTC programs about two and a half years ago. The programs have always been housed with the College of Arts and Sciences, and Salter was meeting with program directors to see what the college could do to help and support them.

“When I started realizing the things they were missing, I realized we could fix those things,” Salter says.

One program that Salter has helped with in her short tenure is to improve the ROTC’s outreach program to area schools.

“It's called the Cross-town program,” Salter says of the outreach to the city’s and region’s historically black colleges of Benedict and Morris and Allen University as well as the predominantly female Columbia College and even to Midlands Technical College.

“We are the only ROTC program in the area, so students from those schools come to UofSC for their military training program,” she says. The outreach not only helps increase UofSC’s total ROTC numbers, but also helps with diversity in the ranks.

Other key improvements cited in the NROTC recognition letter from Defense Secretary Mark Esper was the living and learning community for ROTC members at Columbia Hall, similar to ones the university has created for students who share either a background or interest, such as the International House at Maxcy College, or a discipline or major, such as the business community at East Quad.

“Living together is a way for them to build their sense of trust and community outside the classroom,” Salter says. “They all have a similar lifestyle. It is intense what these students do with the discipline and the respect that they have for one another and their commanders.” 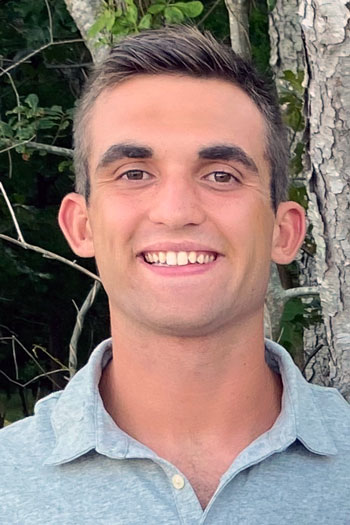 English major Pat Spencer of Delaware lived in the NROTC living and learning community last year as a freshman.

English sophomore Pat Spencer of Delaware lived in that community last year as a freshman.

“You build this really special bond because you are all going through the same thing,” Spencer says. “We’re all working toward the same thing.”

But Spencer says, having “regular” college students in the mix with him and his ROTC classmates was beneficial as well.

“It was also fun just mixing in with regular students,” he says. “It provided a little break from the military aspect and a chance to experience normal student life.”

Spencer says he has known for some time that he wanted to be an officer in the Navy — “the best of the best.”

“My grandfather was in the Marines and I always had a connection with the military,” says Spencer, the oldest of three boys in his family. “In my family we always have to be the best of the best. Being a naval officer was the absolute best of the best.”

Spencer says that upbringing helped create his work ethic and self-discipline to “get the hard work done and enjoy my free time later.”

That is a message he has tried to pass along to his younger brothers as he has also tried to set a good example for them.

“I would definitely say that a lot more people should consider ROTC,” Spencer says. “A lot of people don’t realize all the benefits. The view of the military is you can go to a service academy or enlist, but nobody really thinks about ROTC.”

After he serves his five years in the Navy following graduation, Spencer has his sights set on being a teacher like his father.