Thien Nguyen's compassion for others was kindled at an early age

To earn a nursing degree, Thien Nguyen had to overcome a language barrier and financial hardship — a familiar tale for many young immigrants to the United States.

But there’s much more to Nguyen’s story, and it began 20 years ago in Vietnam when he was 5 years old. 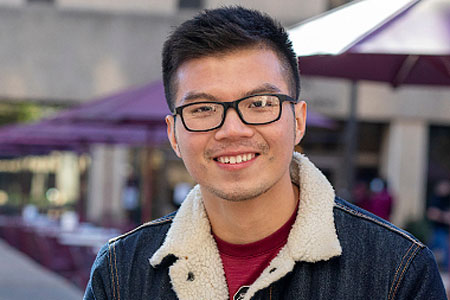 Thien Nguyen is looking forward to working for Prisma Health as a new RN.

“My father died when I was 5, but I grew up feeling like I was really loved,” he says. “So many people stepped in to help my mother take care of me, and I think that fostered my own sense of compassion and concern for others.”

Nguyen grew up in Saigon and in his teens had the opportunity to help translate for patients at a rural health clinic. He vividly remembers an elderly woman approaching him, saying, “Doctor, I’m hurting! Can you help me?”

“And I wasn’t able to help her. It was like seeing someone drowning and not knowing how to swim. I brought her to the doctors and translated for her, but I really wanted to help her myself. I knew then what I wanted, and I knew the purpose of my life — to take care of people.”

At age 20, he immigrated to South Carolina, following his mother who had settled in Greenville the year before. Several cousins had also settled there and had foregone college to start working. But Nguyen had his sights set on earning a nursing degree and, after intensive English studies, became the first college student in his family when he was accepted at the university.

Nguyen’s approach to college life has been disciplined, rising early to work out, study and pursue other scholarly projects. In addition to earning scholarship support from the college, Nguyen has served on the nursing college’s student advisory board and as vice president of Men in Nursing, a mentoring group for male students in the college.

Along the way, he earned a Magellan award for geriatric research in the nursing college’s Center for Advancing Chronic Care Outcomes through Research and also volunteered at Community Carolina Health.

It hasn’t been all work, though. Nguyen joined the Carolina Gentlemen, an acapella vocal group that performs around campus. “It’s a fun thing, a hobby to balance out my life,” says Nguyen, who also plays piano, bass guitar and sings with the worship band at his church in Columbia.

One of Nguyen’s scholarships obligates him to work as a nurse in South Carolina for the next two years, and he hopes to do that at Prisma Health in Greenville.

“I want to work in the emergency department — I’m energetic and I like the pace and I like the process of how we take care of patients there. When they’re the most vulnerable, we can help them,” he says. “My mom has always said if you wake up and look forward to going to work, that’s the job for you. That’s how I feel when I wake up.”