“I have a lot of interests. I like math. I love to read and learn about languages. I enjoy research. UofSC offers a lot of outlets, but at the same time, being a Capstone Scholar and being in the Honors College has also given me a small community, where I feel at home,” says Felicia McGill, a junior from Cassatt, South Carolina, who is studying math and Spanish. “It’s the best of both worlds. I can explore anything I want because it's a big university, but I can also find my niche.” 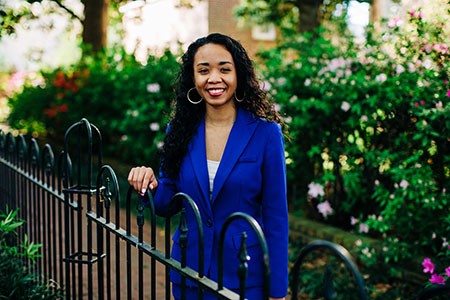 Honors College junior Felicia McGill is studying math and Spanish in the College of Arts and Sciences.

The prestigious scholarships are awarded annually to undergraduate STEM majors across the country. This is UofSC’s 29th consecutive year of scholarship winners, bringing the university’s recipients to 61.

Being named a Goldwater Scholar will help open doors for their future plans to continue their education and research by connecting them with Goldwater recipients and other scholars.

“When I got my Goldwater acceptance, they immediately put me in contact with a network of older Goldwater Scholars who had received fellowships and scholarships and advanced degrees, people who had signed up to mentor me and other new Goldwater awardees,” says Pollack. A graduate of Nation Ford High School in Fort Mill, Pollack is also an 1801 Scholar, a merit award offered to the top 50 high school students in South Carolina entering the Honors College.

UofSC’s winners join 410 undergraduate students in the United States to receive 2021 Goldwater Scholarships. More than 1,200 students were nominated by 438 institutions. Established by Congress in 1986 to honor the lifetime work of Sen. Barry Goldwater, the scholarship is awarded to sophomores and juniors pursuing research careers in mathematics, natural sciences and engineering. 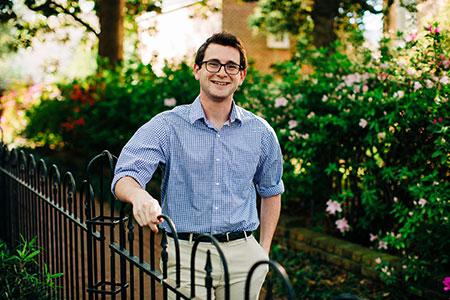 Duggan has always seen himself as a scientist, even when he was a little kid finding critters in the woods.

“Later, when we moved to Emerald Isle (North Carolina), I was exploring the ocean, kayaking or throwing a cast net to see what I could discover,” he says. “When I was deciding on colleges and took the Honors College tour, I met all these passionate people and saw lots of amazing opportunities for research and applying my interest in science at South Carolina.”

In professor Timothy Mousseau’s biology lab, Duggan has combined his interest in monitoring ecological health with his computer science skills to use artificial intelligence to automate analysis of images from motion-activated cameras to track animal movement in the Chernobyl and Fukushima radioactive areas and on National Guard sites in South Carolina. He also was awarded the Magellan Scholar Award to apply machine learning in professor Nathan Senner's lab to study how bird movement patterns can help identify successful nesting attempts. He plans to pursue a doctorate in computational biology and conduct research in data sciences.

McGill says her brother is the driving force for her interest in neurodevelopmental research – specifically autism. McGill began her research as a freshman in professor Jane Roberts’ psychology lab, studying social attention in autistic preschoolers. She paired this experience with a summer research opportunity at Princeton University as well as a Spanish-immersion study abroad at University of Puerto Rico.

“Autism is something I live with every day with my brother. He inspires me, so being selected for the Goldwater Scholarship means more than the monetary award or adding to my resume. I want to help people like my brother,” she says.

McGill, who also is recipient of a Gilman Scholarship for study abroad, plans to study for a doctorate in neuroscience and continue autism research, focusing on language development and bilingualism. 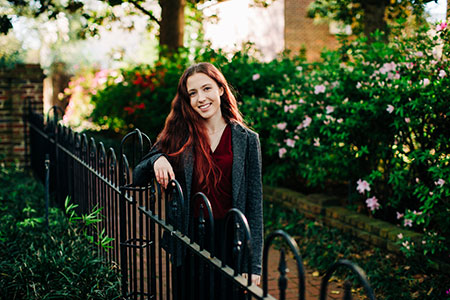 Honors College sophomore Charlotte Pollack is studying biochemistry and molecular biology in the College of Arts and Sciences.

A curiosity about how things work and encouragement from family and teachers inspired Pollack’s interest in science.

“I like to uncover and understand things,” she says. “In science, there's a lot of waiting and a lot of repetition, and, oh my gosh, constant failing and trying again. But it's worth it. When I make a breakthrough, I feel like I’m in on a secret.”

A recipient of UofSC’s SURF and Magellan research grants, Pollack works with the College of Pharmacy evaluating molecular compounds that eventually can be used in drug treatments. She’s currently examining a protein called DDX3 and how it affects stress granules in cells, which are linked to a variety of illnesses. She plans to earn a medical degree and a doctorate in medicinal chemistry.

All three Goldwater recipients say the guidance they received from National Fellowships and Scholar Programs improved their applications and contributed to their success by providing different perspectives and insights from mentors with a variety of expertise. The office is available to help students find a good fit for their interests and qualifications and offer resources and guidance during the application process.

“When I told my parents about the award, they obviously were really happy. They said you have this whole team of people there who are willing to invest in you and who are rooting for you,” Pollack says. “That was a moment that I was so glad South Carolina was the choice I made. It made me feel really confident going through the process.”

For other students interested in applying for a competitive award, the advice is to connect early with National Fellowships and Scholar Programs and to start research in their freshman year to make it part of the university experience from the beginning instead of trying to work it in later.

“When you get involved in research, you discover what your interests are,” Duggan says. “Those activities will help shape you and prepare you for the career you want to pursue. The advisers can help you make that passion come through in your application and highlight the skills that make you a strong candidate.”

“National Fellowships are included in President Caslen’s strategic plan, A Path to Excellence, as part of priority 8, winning with character. Our Goldwater nominees exemplify the best of the University of South Carolina in every way, and we are thrilled that three of the four were selected as 2021 Goldwater Scholars,” says Novella Fortner Beskid, assistant dean, National Fellowships and Scholar Programs.