But first, follow the 1998 business administration graduate across the plaza at Camperdown. Listen to him talk about the ground underfoot, which his family’s development firm, Centennial American Properties, recently transformed into the upstate city’s latest big draw.

Today’s Camperdown is a $350 million mixed-use, commercial-residential-entertainment complex overlooking Greenville’s popular Falls Park. From 1876 to 1959, however, the same stretch of riverfront was home to Camperdown Mill, at one time the second-largest textile mill in South Carolina.

“All this was the mill village,” says Glenn as he guides you under a flutter of white sail shades toward Falls Tower, the 17-story high rise that anchors the reimagined space. “My grandmother worked at Camperdown Mill and lived in the mill village, right past Camperdown Baptist Church. The mill got torn down in the 1950s, and shortly thereafter the Greenville News building was built.”

The old Greenville News building is gone now, too — its offices relocated around the corner in 2017 when Brody and his father, David Glenn, ’70, embarked on Camperdown — but the site continues to make headlines, particularly in business circles.

This spring, Camperdown welcomed its first tenants, including the nine-story AC Hotel and a wave of new eateries. In the months ahead, a yet-unnamed 4,500-square-foot restaurant will open on the ground floor of Falls Tower (with an enviable deck overlooking Falls Park), and local CBS affiliate WSPA will move in next door.

And the outlook only improves with altitude. The 18 luxury condo spaces in Falls Tower, which were marketed as “shells” to be built-out by the buyer, are 85 percent sold, and the building’s commercial office space is at 100 percent occupancy, including the northwest corner of the seventh floor, which will become the new home of Centennial American Properties. “We’ll move in at the end of the summer,” says Glenn. “Once everybody else is settled in and happy.”

On the Reedy River 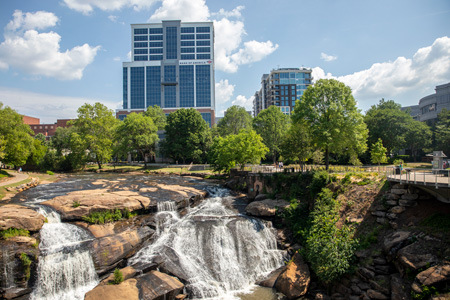 If you think Camperdown is business as usual for Centennial American, think again. Brody and David Glenn have worked on other big projects in the Greenville area, including the minor league baseball stadium, Fluor Field, where their headquarters has been located for the past 14 years, but the company’s forte is retail, and their footprint is nationwide.

“A lot of what we do on the road is sort of prototypical,” the younger Glenn explains. “We’re a big Walgreens developer, big Trader Joe’s developer. We build very similar buildings all over. With Camperdown, there was a different set of challenges.”

But as the old saying goes, challenge is opportunity, and as Glenn leads you past Falls Tower, the plaza narrows into a sidewalk along the Reedy River; downstream, pedestrians on Liberty Bridge pause for selfies, the falls cascading behind them.

The most gratifying thing is making our hometown better, not just for my generation, but for generations to come.

“Everybody who comes to Greenville, one of the first things they do is go to Falls Park and cross the footbridge,” says Glenn. “But there was no connection to the river from over here, so we redid all of the riverscape on this side. Nobody had really put it all together before. That was one of the biggest attractions of the site to me.”

The other big attraction was the site’s position between the traditional Main Street business corridor and the hopping West End. Each district has enjoyed its own renaissance in recent years, but prior to the demolition of the Greenville News building, the two ends of Main Street felt a little disconnected.

“Greenville has had a lot of momentum for the last 25 years,” says Glenn. “What Camperdown does is connect the West End to downtown. It also creates a place for people to congregate and really solidifies Main Street and the river as the center of downtown Greenville.”

And the center of Camperdown is the plaza, which is designed to pull people from every direction, whether through the underground garage or one of three pedestrian entry points — Broad Street, Main Street or, perhaps most enticingly, that pathway up from Falls Park.

Stars come out at night 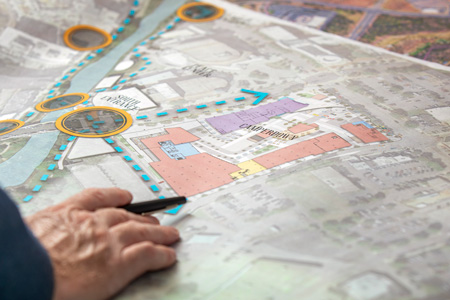 Camp, a freestanding restaurant on the plaza, has lifted its garage doors. Juniper, a swanky rooftop gin bar at the AC Hotel, is stirring up cocktails with an eighth-floor view. Insomnia Cookies is open, too, and there are other announcements coming. Camperdown is heating up, and it’s easy to see the plaza’s appeal.

An interactive installation by Greenville artist Yuri Tsuzuki casts colored lights and generates music inspired by the sounds of a textile mill. Closer to the Main Street steps, a rust-colored façade is peppered with tiny backlit holes. Those stars you were promised? Here they are, ready to pop when the sun goes down.

“Isn’t that pretty?” says Glenn. “That is the constellation of stars the year they opened Camperdown Mills, that light pattern. There’s a website where you can enter in the date and a location and see where all the stars were on that night.”

The stars were the brainchild of Beau Welling, the project’s land use developer. Other details were inspired by developments that have caught Glenn’s eye around the world. Those sail shades, for example, were inspired by something he saw in a public square in France.

“My dad always told me the path of the pioneers was strewn with bones,” he explains. “Everything that we do, in some form or fashion, is taken from, or was inspired by, another development that I’ve seen and that’s been successful. We just bring it back and make it better.”

What’s good for Camperdown should be good for Greenville, says Glenn.

“The most gratifying thing is making our hometown better, not just for my generation, but for generations to come,” he explains. “The leaders before me, the business leaders and the leaders at the City of Greenville, really concentrated on giving back to their hometown. It’s been gratifying for me personally to try to follow in their footsteps.”