For the 14 million tourists who visit every year, the Blue Ridge Parkway offers a leisurely joyride through nature. For University of South Carolina geography alumna Tracy Swartout, ’95, who became the national park’s first female superintendent in May, it’s more like a homecoming.

For eight-and-half years, Swartout was deputy superintendent at Mount Rainier National Park in Washington. But the Columbia, South Carolina, native began her National Park Service career at Congaree National Park, outside Columbia, and she has been a regular visitor to the scenic 469-mile Blue Ridge Parkway her whole life.

It was a favorite road trip for her family when she was a child, and before she transferred to the University of South Carolina as a sophomore, she spent a couple of semesters at Montreat College, in Black Mountain, North Carolina, not far from the parkway’s Asheville headquarters. It became a go-to destination for outdoor recreation for her and her friends. 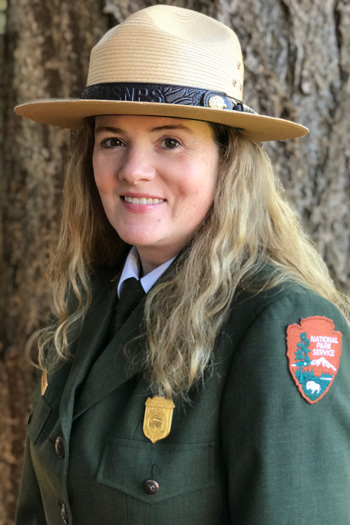 Tracy Swartout, the first female superintendent of the Blue Ridge Parkway, assumed leadership of the 85-year-old national park in May.

“Even when I went to USC, I'd go backpacking and I'd go rock climbing with friends from Columbia and we'd use the parkway — we'd go over to the Smokies, we’d go to Pisgah,” she explains. “Even when I went away to grad school in Canada and I brought Canadian friends home with me, we drove the parkway. It's sort of always been a touchstone in my life.”

And now it’s Swartout’s job to help bring that unique parkway experience to future park guests, which means recognizing the challenges but embracing the opportunities presented by its distinctive topography, history, design and function.

“It's a historic infrastructure park,” she explains. “We're really preserving that experience of getting on the road, winding through that beautiful landscape, stopping along the way and having these experiences where you kind of go into the resource — you're going onto an overlook, you're looking out at a historic home.”

It’s also a complicated dynamic to manage. Because the parkway’s viewshed extends beyond the boundaries of the park itself, Swartout has to weigh the interests of stakeholders in 29 counties, over two states, from the southern terminus of the Shenandoah National Park in Virginia to the edge of the Great Smoky Mountain National Park near Cherokee, North Carolina.

I think people grow up with this idea of what national parks are or what a park ranger is — you know, the iconic flat hat, the guided programs. It is that, but it’s also like managing a small municipality.

In that respect, the Blue Ridge Parkway differs significantly from “single-gate” national parks such as Congaree National Park, where she cut her teeth.

“We don't have just one point of entry [at the Blue Ridge Parkway]. We have many, many, many points of entry,” she says. “And that presents us with really interesting opportunities but also special challenges. People often want to add more connections to the parkway, because they want to connect their community to the experience we provide, and yet one of the things that we're trying to ensure, protect and preserve is that experience.”

There’s more to the job than most visitors may realize — and more to the park itself. There’s the natural landscape and the roadway that winds through it, but there’s also the infrastructure and services that undergird all that scenic mountain beauty: water treatment plants, power lines, service roads, EMS services — even a police force.

“I think people grow up with this idea of what national parks are or what a park ranger is — you know, the iconic flat hat, the guided programs,” she says. “It is that, but it’s also like managing a small municipality.”

And then there are those aspects of the 85-year-old park’s manmade infrastructure that are as beautiful as they are functional, and that are as much a part of the visitor’s experience as the landscape.

“Thanks to the work of landscape architects and multiple New Deal era programs of the 1930s and 1940s, the roads and bridges were designed to be part of the visitor’s experience, it's really an opportunity to see some amazing feats of civil engineering,” Swartout says. “There are places where they laid the road delicately upon the land and allowed for the road to create the experience.”

While parkway construction began in the 1930s, she also cites modern engineering marvels such as Linn Cove Viaduct, a seven-mile stretch alongside Grandfather Mountain completed in 1987 after decades of study and debate. Once considered the parkway’s “missing link,” it is now a top destination — and proof that improvements can always be made, even at one of the most popular national parks in the country.

For Swartout, now in her twenty-first year with the National Park Service, it’s a reminder of what drew her to the profession in the first place — when an undergraduate class taught by South Carolina geography professor Bob Janiskee revealed the complexities of the park system and the work that goes into maintaining, improving and sharing its wonders with the public.

“I love my job more now than I did the day I started, and I loved it when I started,” she reflects. “It is everything I thought it would be and so much more.”