If humans ever move to Mars, several University of South Carolina alumni will be among those who helped make the journey possible.

South Carolina graduate students have played instrumental roles in developing the technology to scour the Red Planet’s surface for signs of ancient life and then getting that technology safely there. Whether in research labs on campus or in NASA offices, they’ve made their mark on our neighbor in the solar system.

You might say the record for the longest field goal in Gamecock history belongs to Yang Cheng, a 1993 geography Ph.D. graduate. 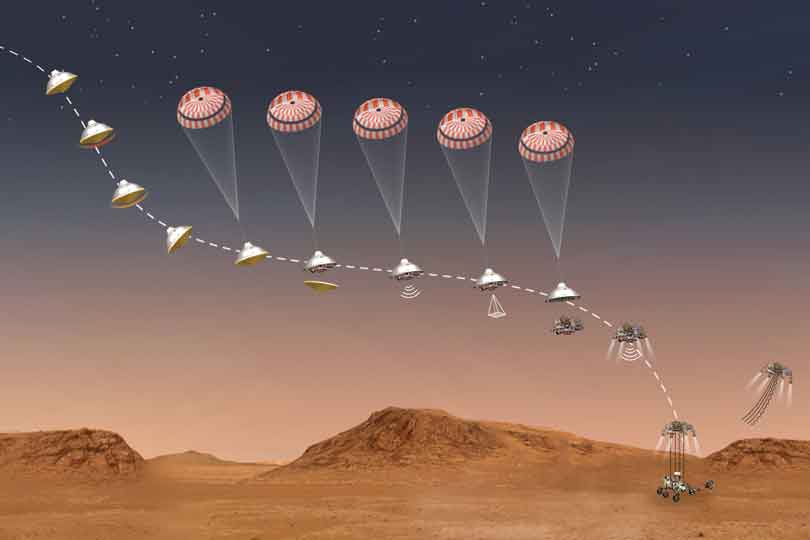 Cheng was a key designer of the landing vision system for NASA’s Perseverance rover, which launched in 2020 and reached Mars in February 2021. When winds over the Red Planet tried to sweep the lander off course, the lander’s cameras detected the change. Rocket boosters fired to steer the lander toward a safe landing zone. Back on earth, Cheng held his breath.

He watched the livestream from his home office, his eyes fixed to his computer screen while an announcer’s voice shared the lander’s speed and elevation every few seconds. When the rover touched down safely within five meters of the target location — less than the distance between the field goal uprights — Cheng slapped his desk, jumped in his seat and celebrated like he’d just scored the game-winning point.

“That made everyone very happy,” he says, recalling the victorious moment. “It was exciting and a great relief. I was very nervous, but I have confidence in the system.”

Cheng studied mapmaking in China before coming to the university to study geographic information systems. His dissertation focused on using supercomputers to improve satellite images, making them more useful for creating maps.

Since that time, there’s been a revolution in the field, resulting in sharp satellite images and easily obtained GPS data.

But Mars hasn’t seen the same resolution revolution. The only high-resolution images of Mars don’t have the coverage necessary for making a map. The larger images are low-resolution and suffer from problems like jitter from the satellite’s vibration. Since there’s no GPS network and no map of Mars made on the ground, there’s no way to verify a satellite map, either.

I liked seeing a connection between what I did as a nerdy scientist potentially impacting people I cared about.

That wasn’t a problem with previous rovers Cheng helped NASA land on Mars — rovers that aimed for vast flatlands with few obstacles. But Perseverance needed to land in Jezero Crater, a former lake where scientists hope to find ancient signs of life. Landing in a dried-up lake is no simple task.

“This area’s pretty dangerous,” Cheng says. “There are a lot of landing hazards, like craters, quicksand, boulders and steep landscapes.”

Because of Cheng’s background in cartography and geography, he got the task of mapping Mars. He developed ways to remove jitter and other errors from the Martian images to create a map NASA could trust to help steer the lander to the surface.

“I was excited that I had the opportunity to make the first navigation map for the safe landing of a spacecraft in human history,” he says. “But I was nervous because this is the first time in history.”

Now that the rover is roaming Jezero Crater and collecting samples, Cheng is gratified to know that he helped it get there.

“I’ve always been interested in space and interested in doing something that has not been done before,” Cheng says. “That’s my motivation, the passion that drives me forward.”

Chemistry at a distance

Meanwhile, the Perseverance rover is studying rocks and soils on Mars with the help of technology developed by South Carolina chemists. The rover’s “SuperCam” includes a spectrometer device that uses a laser to analyze the components of objects several meters away. 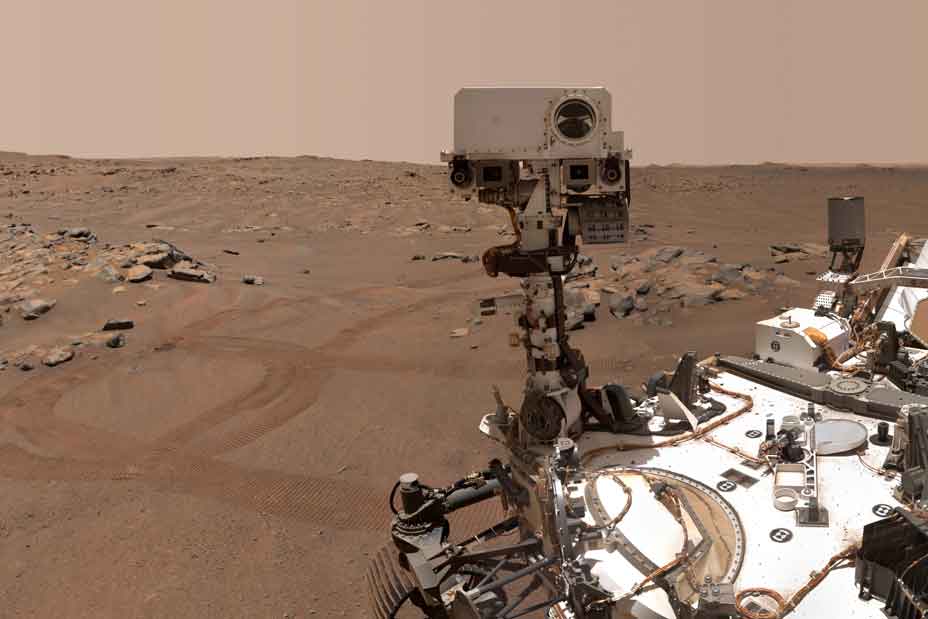 Perseverance took this selfie over a rock nicknamed “Rochette,” on the 198th Martian day of the mission. (Photo courtesy of NASA)

Thirty years ago, Raman spectrometry required up close and personal contact between the spectrometer and the object being studied. But just before Mike Angel became a chemistry professor at South Carolina, he pioneered a method for collecting the data at a distance.

At the time, Angel was trying to analyze volcanic plumes and radioactive waste tanks that people couldn’t get close to. Mars wasn’t even on the map.

“When I wrote that paper in 1992, I never would have imagined [the technology] would end up on Mars. Not in a million years," Angel says. “I was interested in planetary exploration, but [the spectrometer] was too crude and too big. It needed a lot of engineering.”

Angel, who recently retired as a Carolina Trustee Professor in the Department of Chemistry and Biochemistry, improved on the technology with numerous graduate students in Columbia. One of the first was Chance Carter, who then made standoff spectrometry a pivotal part of his research career.

“What could be more fun than shooting laser beams to do standoff detection?” Carter says, recalling a lot of fun tests in the lab. “It’s just exciting, fun work. It’s captivating. It was exciting because it was something that only we were doing.”

Carter calls Angel “visionary” for leading graduate students to new breakthroughs with spectrometry. “Angel always had this knack for being able to think about what’s the next important thing to do,” he says.

I’ve always been interested in space and interested in doing something that has not been done before. That’s my motivation, the passion that drives me forward.

Most of the Raman spectrometry applications Angel studied were related to defense uses, such as detecting bombs by examining electromagnetic wavelengths. That attracted Alicia Strange-Fessler, whose husband was in the military at the time, to join the lab as a doctoral student.

“I liked seeing a connection between what I did as a nerdy scientist potentially impacting people I cared about,” she says.

Strange-Fessler's research focused on extending the range and accuracy of remote spectrometers in defense applications. But Angel and others were already exploring how the spectrometers could go to space.

Although the specific technology Strange-Fessler worked on was not developed enough to include on Perseverance, the rover does rely on techniques refined by Angel’s students over the years. Strange-Fessler’s work may be carried by the next Mars mission, or it might be sent to the moons of Jupiter and Saturn, Angel says.

That prospect is humbling, breathtaking and inspiring, Strange-Fessler says. “It’s exciting to know that something you’ve worked toward could help make discoveries in other worlds and increase our understanding of the solar system and larger space beyond that."

Angel, who helped analyze data sent back by Perseverance, is excited by the rover’s progress. It already has packaged several rock samples to be returned to earth by a future Mars mission, and the data is promising.