When Carl McClary was just a kid, he never considered solving crimes, being president of an international science academy or being featured on a true-crime television show.

In fact, it would have made sense for McClary to have become an artist like his mother and sister, working with mediums like watercolor, ink and sculpture. 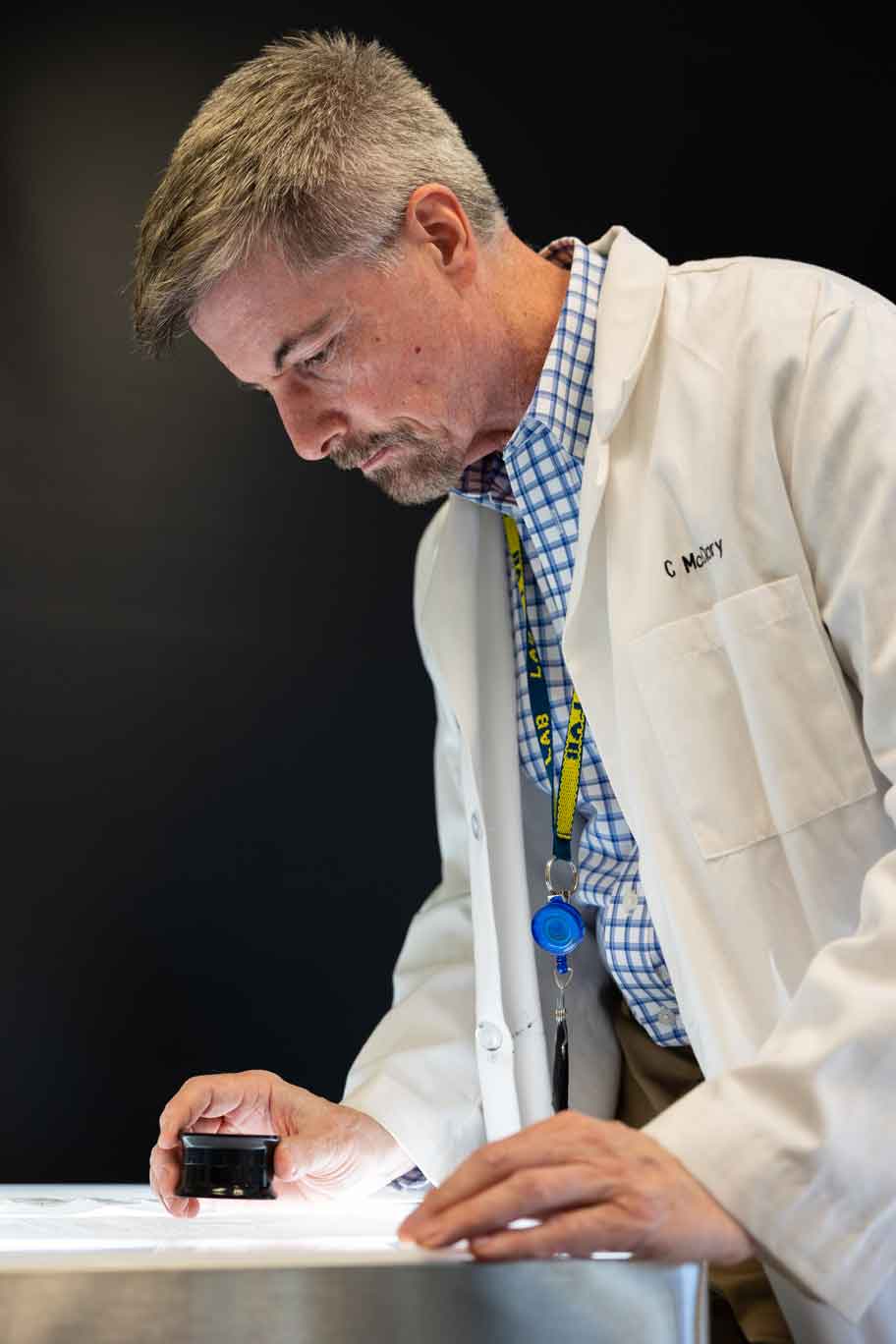 Psychology alumnus Carl McClary is a nationally renowned document examiner and president of the American Academy of Forensic Sciences.

Instead, he became a forensic scientist who helps solve violent crimes, including crimes that shook the nation. But the artistic gene didn’t escape McClary completely. He uses his creativity in the way he approaches his scientific work.

“I grew up around paper and ink,” McClary says. “I saw a job posting about getting to work with those same materials, and I knew immediately that was something I wanted to do.”

That job listing was as a trainee forensic document examiner — a kind of detective who examines ink, paper, handwriting and other evidence to determine origin, writership or authenticity. That was all it took to set McClary on a path that would lead to where he is now: nationally renowned document examiner and president of the American Academy of Forensic Sciences.

Origins of a Gamecock

Growing up in Summerton, South Carolina, McClary says small-town values influenced him in a big way.

“I learned the value of respecting people and valuing their backgrounds,” McClary says.  “I’m very proud of that.”

He carried those values with him when he enrolled at the University of South Carolina as a psychology major in 1980.

“My time at UofSC afforded me the ability to collaborate and socialize with many different types of people,” McClary says. “It started me off on the right foot. I learned how to come to a consensus with other individuals.”

As time would tell, these particular skills would come in very hand for McClary’s eventual leadership position at the AAFS, where they publish forensic science standards, among many other programs.

After graduation, McClary worked for the South Carolina Law Enforcement Division in computer operations. But it wasn’t long before he discovered that examining documents was a calling that allowed him to use both his logical and artistic sides.

“Forensic document examination looks at the creative side of people as well as the investigative side,” McClary says. “I’m very detail-oriented, and this job definitely appeals to that.”

McClary spent two years training with the SLED in courses offered by the FBI and U.S. Secret Service, learning to examine and compare hand printing, indentations on paper, ink comparisons and even piecing together shredded documents — skills he’d use to help obtain guilty pleas from criminals like the Olympic Park Bomber and convictions of arsonists and illegal arms dealers.

“What’s important to know is what handwriting can’t tell you,” McClary says.

Handwriting can’t tell if someone is right or left-handed, their age or their race, he says. But it can reveal a lot about a person’s habits and writing patterns, given enough information. He says an extensive and contemporary writing sample from a person is vital to being able to determine if they are the creator of a piece of evidence.

For the document analysis itself, McClary uses a variety of high-tech devices to examine the different properties of the materials he is studying. A video spectral comparator detects differences in inks and paper by using alternate spectral wavelengths of visible and invisible light. At about the size and shape of a toaster oven, the comparator works a bit like one as well, too. Only instead of heat radiating down, light shines onto the document through different filters. The document is then viewed through a camera and computer monitor, and as the wavelength of the light is adjusted, the picture changes.

My time at UofSC afforded me the ability to collaborate and socialize with many different types of people. It started me off on the right foot.

And, of course, among the more recognizable tools McClary uses: a microscope.

In his career case, McClary used handwriting examination in the Eric Rudolph case, also known as the Centennial Olympic Park Bomber, in Atlanta in the mid 1990s. The bomber was suspected to have written and mailed several long letters to local news agencies. McClary compared those and other writings to documents bearing Rudolph’s known handwriting and determined that Rudolph may have written some of the letters.

In another case, authorities discovered husband and wife law enforcement agents were selling firearms illegally out of their home. McClary spent five months piecing together shredded documents that were used to help convict the couple.

In addition to more than 45 court appearances, McClary contributes some of his expertise to the AAFS. He has worn many hats at the academy, including chairing the Questioned Documents Section, which studies documents to determine their authenticity. He has served on the board of directors, as vice president and finally president starting in February 2021.

In his presidency, McClary has worked to uphold the AAFS mission to provide collaborative research, quality education and recognize leadership to advance forensic science. He helped implement a strategic plan that included a rebranding initiative and website overhaul, pivoting to digital and hybrid conference models, and continuing to digitize content into an on-demand format — making it easier for those domestically and internationally to gain access.

The annual AAFS Scientific Conference in Seattle, Washington, typically draws over 3,000 world-renowned professionals. This year, the conference will consist of virtual and in-person workshops and individual scientific presentations thanks to McClary’s leadership. Hundreds of experts from around the world will present content in the 11 forensic disciplines, including anthropology, criminalistics, psychiatry, questioned documents and toxicology.

McClary’s term as president ended in February, but he will still chair on two of its committees. He’ll also soon be retiring from the Bureau of Alcohol, Tobacco, Firearms and Explosives Forensic Lab in Atlanta after 26 years serving as senior questioned documents examiner.

As far as retirement goes, McClary doesn’t plan to slow all the way down. He says he’ll stay involved professionally through various groups he is a member of, possibly assist with case peer-reviews and maybe a speaking engagement or two around the country.

McClary is also looking forward to a very special episode of “Forensic Files” — he recently was interviewed for the documentary-style television show that highlights how forensic science is used to solve crime.

“I think 10-year-old me would be very proud that I’ve reached this point in my life and career,” McClary says.