Water-analyzing aerial drone could get bigger and better 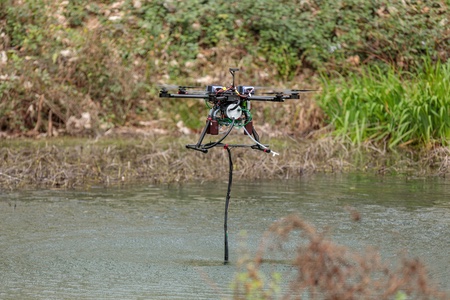 A test run at the A.C. Moore Garden pond reveals the  capabilities of the water-analyzing drone prototype that involves faculty members and students from four labs in the College of Arts and Sciences and the College of Engineering and Computing.

But this proof-of-concept machine has a lot more than that going for it. The drone also packs a laser that can detect the level of chlorophyll in phytoplankton, giving scientists on shore a real-time analysis of water in the drone’s siphoning tube.

“The key here is targeted sampling,” says Nikos Vitzilaios, an assistant professor of mechanical engineering. “Drones have already been developed to collect water. But ours has a sensor that allows us to do very quick analysis, even before we collect a sample. With the old method, you had to collect samples and take them back to the lab to see what you had.”

Vitzilaios and three other professors have used an internal ASPIRE grant from the university’s Office of the Vice President for Research to develop the drone’s capabilities. A recent test run at a small pond on the university campus went smoothly, and the team has submitted a $1.2 million grant proposal to the National Science Foundation to develop an even more sophisticated drone system.

“The chlorophyll sensor is one of four optical sensor devices we envision using on a drone,” says chemistry professor Michael Myrick, who developed the drone's optics system. “With other sensors we could potentially detect things like oil spills or other chemical or biological contaminants.”

Vitzilaios says the goal of the NSF proposal would be to develop a more advanced drone — one that could fly up to 70 minutes or about nine miles. That sort of range would greatly expand the scientific possibilities.

A simulation at the university’s Baruch Institute for Marine Biology and Coastal Studies has shown that a drone could, in four minutes, collect samples at the coast that humans in a boat would need 35 minutes to gather. 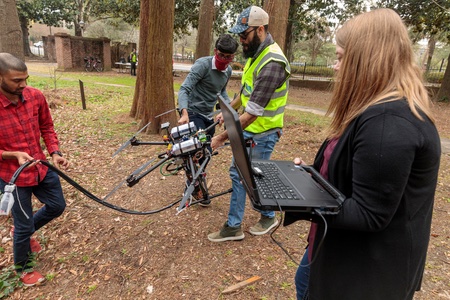 “That means a drone could get many samples in the same time period of a tidal cycle — more than you could in a skiff,” says marine biology professor Tammi Richardson, another member of the team. “And in shallow waters or tidally influenced waters like marshes, drones can get to locations that boats can’t and often do it a lot faster.”

Richardson noted the sampling capabilities of the drone enable basic characterization of phytoplankton communities, such as species composition. They system also could be used to look specifically for toxic phytoplankton species or E. coli and other problematic bacteria.

“Safety, avoiding contamination of samples and access are big advantages with a drone,” says geography professor Michael Hodgson, who has worked on the drone’s mapping capabilities. “In planning the drone mission, we map and model the legal launch and landing sites that enable us to see the drone throughout its mission.”