Old age isn’t a modern phenomenon – many people lived long enough to grow old in the olden days, too

There is a common misperception that long life spans in humans are very recent, and that no one in the past lived much beyond their 30s before now. This is not true. There is physical evidence that plenty of people in the past lived long lives — just as long as some people do today. Anthropology professor Sharon DeWitte writes for The Conversation on the evidence that proves old age isn't a modern phenomenon.

Every year I ask the college students in the course I teach about the 14th-century Black Death to imagine they are farmers or nuns or nobles in the Middle Ages. What would their lives have been like in the face of this terrifying disease that killed millions of people in just a few years?

Setting aside how they envision what it would be like to confront the plague, these undergrads often figure that during the medieval period they would already be considered middle-aged or elderly at the age of 20. Rather than being in the prime of life, they think they’d soon be decrepit and dead.

They’re reflecting a common misperception that long life spans in humans are very recent, and that no one in the past lived much beyond their 30s.

But that’s just not true. I am a bioarchaeologist, which means that I study human skeletons excavated from archaeological sites to understand what life was like in the past. I’m especially interested in demography – mortality (deaths), fertility (births) and migration – and how it was linked with health conditions and diseases such as the Black Death hundreds or thousands of years ago. There’s physical evidence that plenty of people in the past lived long lives — just as long as some people do today.

Bones record the length of a life

One of the first steps in research about demography in the past is to estimate how old people were when they died. Bioarchaeologists do this using information about how your bones and teeth change as you get older.

For example, I look for changes to joints in the pelvis that are common at older ages. Observations of these joints in people today whose ages we know allow us to estimate ages for people from archaeological sites with joints that look similar. 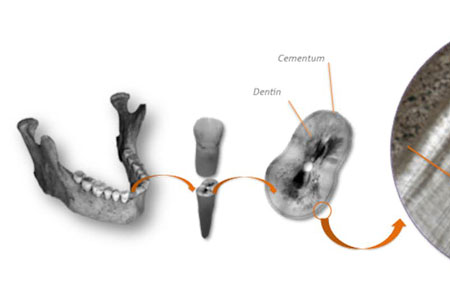 A researcher can count the layers within a tooth that were added over time to determine how old a person lived to be. Benoitbertrand1974/Wikimedia Commons, CC BY-SA

Another way to estimate age is to use a microscope to count the yearly additions of a mineralized tissue called cementum on teeth. It’s similar to counting a tree’s rings to see how many years it lived. Using approaches like these, many studies have documented the existence of people who lived long lives in the past.

For example, by examining skeletal remains, anthropologist Meggan Bullock and colleagues found that in the city of Cholula, Mexico, between 900 and 1531, most people who made it to adulthood lived past the age of 50.

And of course there are many examples from historical records of people who lived very long lives in the past. For example, the sixth-century Roman Emperor Justinian I reportedly died at the age of 83.

Analysis of the tooth development of an ancient anatomically modern Homo sapiens individual from Morocco suggests that our species has experienced long life spans for at least the past 160,000 years.

Clearing up a math misunderstanding

Given physical and historical evidence that many people did live long lives in the past, why does the misperception that everyone was dead by the age of 30 or 40 persist? It stems from confusion about the difference between individual life spans and life expectancy.

In medieval England, life expectancy at birth for boys born to families that owned land was a mere 31.3 years. However, life expectancy at age 25 for landowners in medieval England was 25.7. This means that people in that era who celebrated their 25th birthday could expect to live until they were 50.7, on average — 25.7 more years. While 50 might not seem old by today’s standards, remember that this is an average, so many people would have lived much longer, into their 70s, 80s and even older. 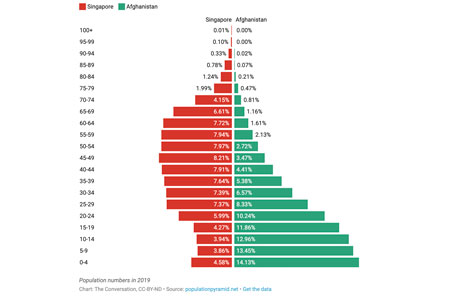 Life expectancy is a population-level statistic that reflects the conditions and experiences of a huge variety of people with very different health conditions and behaviors, some who die at very young ages, some who live to be over 100 years old, and lots whose life spans fall somewhere in between. Life expectancy is not a promise (or a threat!) about the life span of any single person.

What some people don’t realize is that low life expectancy at birth for any population usually reflects very high rates of infant mortality. That’s a measure of deaths in the first year of life. Given that life expectancies reflect averages for a population, a high number of deaths at very young ages will skew calculations of life expectancy at birth toward younger ages. But typically, many people in those populations who make it past the vulnerable infant and early childhood years can expect to live relatively long lives.

Advances in modern sanitation — which reduce the spread of diarrheal diseases that are a major killer of infants — and vaccinations can greatly increase life expectancies.

In Afghanistan, life expectancy at birth is low, at just over 53 years, and infant mortality is high, at almost 105 deaths for every 1,000 children born.

In Singapore, life expectancy at birth is much higher, at over 86 years, and infant mortality is very low – fewer than two infants die for every 1,000 who are born. In both countries, people do survive to very old ages. But in Afghanistan, because so many more people die at very young ages, proportionally fewer people survive to old age.

Living a long life has long been possible

It’s incorrect to view long lives as a remarkable and unique characteristic of the “modern” era.

Knowing that people often did have long lives in the past might help you feel more connected with the past. For example, you can imagine multigenerational households and gatherings, with grandparents in Neolithic China or Medieval England bouncing their grandchildren on their knees and telling them stories about their own childhoods decades before. You might have more in common with people who lived long ago than you had realized.