Dr. Armen Shaomian serves as the Preston Faculty Principal and is an Associate Professor in the Department of Sport and Entertainment Management. He joined UofSC in 2012, where he developed and expanded the live entertainment management curriculum.

Dr. Shaomian grew up in Stockholm, Sweden, where he began developing his musical and performing arts career at a very young age. Performing blindfolded and upside down before an audience of thousands as he portrayed young Mozart at the Royal Concert Hall in Stockholm, Dr. Shaomian showed early on that he was a piano prodigy in his own right. Additionally, as a young celebrity, he was invited to lend his voice to several characters in Disney and Warner Bros. animations. Fluent in four languages and with a desire for new experiences, he traveled to the United States during a study abroad program as a high school student. Initially intended as a year-long exchange program, he quickly developed roots and decided to remain in the U.S., continuing on to pursue an undergraduate degree in piano performance at Wayne State University and both a master and doctoral degree in piano accompanying and chamber music at the University of Miami.

An ardent promoter of the arts and a supporter of artists, Dr. Shaomian has traveled around the world to seek out new and innovative methods of instruction, learning, and doing business in his field. He has an active artistic schedule, regularly performing concerts in the United States and Europe. A number of his recordings are featured on all major streaming services.  As a researcher, Dr. Shaomian focuses on the live entertainment industry and performing arts management and leadership, and he is sought after to present and give keynotes at international music industry conferences. Currently, he serves as President of the Music and Entertainment Industries Educators Association.

His husband Wes (a Gamecock alum, attorney, and international MBA) splits his time between Columbia and Washington, D.C., where he works on Capitol Hill. Together, Dr. Shaomian and Wes endeavor to bring their global brand of leadership to Preston and use their combination of skills and experiences to provide a dynamic environment for Preston’s residents. 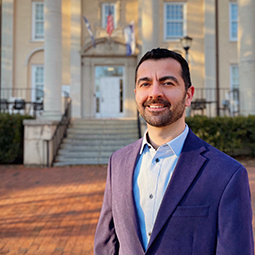