As a Gamecock, my commitment has No Limits 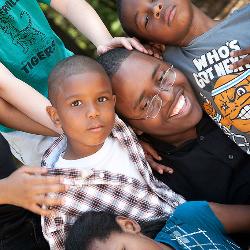 Commitment has no limits

Wilyem Cain was angry and negative. But that all changed after he started volunteering at the local Boys and Girls Club.

After his great-grandmother's death, Wilyem Cain lost his way. Her death hit him hard and his attitude changed. "I was devastated," the University of South Carolina student says. "I was angry and negative." And worst of all, he knew his great-grandmother wouldn't approve. At the suggestion of a family member, the Winnsboro native got involved in the local Boys and Girls Club, participating in the after school program. He soon realized that the kids saw him as role model. "If I had a bad attitude," he explains, "the kids had a bad attitude."

Determined not to make that mistake, Cain made a complete turn around, returning to the values taught to him by his great-grandmother, like kindness, generosity and an open heart. "I wanted to treat them (the children) the same way she treated me," he says.

As his involvement deepened, Cain became a club leader. He served as a junior staff member and a program aid. He shared is passion for cooking and sports with the children and taught them valuable life lessons, such as determination and cooperation.

As a student, Cain has remained active in the organization. The political science major volunteers in Columbia-area clubs, helping to develops programs for teens and recruiting other Carolina students to help out. He was tapped by the United Way to speak during fundraising efforts. And, most importantly, when he has time Cain returns to Winnsboro "just to let them know that I'm looking out for them."

Cain has his eyes set on law school and ultimately working for the Boys and Girls Clubs or the United Way. He wants to remain a part of those organizations so he can be there to catch other kids if they fall.

After his great grandmother's death, Wilyem Cain lost his way. But a gap-toothed grin and an outreached hand stopped his fall. When that seven-year-old asked to be his friend, the USC student realized his life could have a purpose. He became active in the local Boys and Girls Club, serving as a role model to area kids. Now Wilyem is planning a future committed to children's advocacy and public service so that he can catch them if they fall.