As a Gamecock, my resilience has No Limits 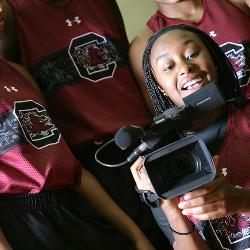 Not even a career-ending medical condition could keep Shelbretta Ball off the court. Ball's never-give-up fortitude and the support of her team keeps her in the game.

The feel of the ball as it leaves her hands, the familiar spin of its flight and the swish as it goes through the net have been a part of Shelbretta "Brett" Ball's life since she was 5 years old. The 5-foot, 8-inch senior guard inherited her passion for the game from two aunts who played collegiate, international and professional basketball.

"Growing up, I was surrounded by basketball," Ball says. "I saw my aunts play major college ball, play as members of Olympic teams and play professionally. They experienced so much through basketball. I wanted to do it, too."

During those formative years, Ball developed a never-give-up attitude and an overwhelming desire to succeed. She trained endlessly and perfected her signature "in and out" move. Recruited by numerous schools, the Mississippi native selected the University of South Carolina women's team in order to play under head coach Dawn Staley and to major in criminal justice and journalism.

However, soon after arriving in Columbia she was ruled medically ineligible to play. "It was a devastating blow," Ball recalls. And for several months, being around the game was painful. "It cut me like a knife just to walk into the gym."

But Ball didn't back down. Relying on the same fortitude she used to face down superior opponents, Brett discovered a new game — a new way to contribute to the team. "It was hard to figure out my role," Ball says. "But with advice from Coach Staley, I've found my place on the team."

Armed with a video camera, Brett produces "Ballin' with Brett," a video blog providing Carolina fans with behind-the-scenes access to the team. For nearly four years, she has documented the women's team from practice sessions and postgame interviews to study hall and travel. "The show has opened so many doors and opportunities for me," Ball says.

One such opportunity is Ball's newest project, a documentary chronicling the experiences of elite college athletes who've been sidelined or benched because of injuries. "The film is an independent study project that developed from a research paper. For several months, I interviewed athletes from the Southeastern Conference who are no longer playing. I'm showing how they transition from student-athletes to students," she says.

And with graduation on the horizon, Ball is focused on developing as many skills as possible before she marches across the stage in spring 2015.

Ball knows her hoop dreams are over, but it's no mystery how she stays on top of her game. Brett lives by the motto, "Don't let your situation determine your destination."