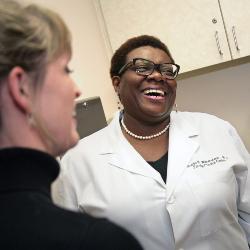 For Dr. Patricia Wilson-Witherspoon being given an award named after Martin Luther King Jr. was almost overwhelming.

“It means the world to me,” she says. “I grew up in that era and there are certain pictures you can depend on in an African-American home: a picture of Jesus Christ, a picture of John F. Kennedy and a picture of Martin Luther King.”

Witherspoon is the medical director of the Department of Family Medicine at USC’s School of Medicine Columbia. She is a past recipient of the Social Justice Award given by USC’s Office of Equal Opportunity Programs.

Witherspoon was singled out for her work not only to bring quality health care to poor urban areas of South Carolina but also to train young residents to understand where their patients live, how culture affects health and how to be an advocate in the world of health care policy.

“I have rotation I call ‘community medicine’ and the resident works for me that entire month,” Witherspoon says. “They are going into communities that may not be like their own.”

Witherspoon and her residents also visit local high schools to talk with students and to serve as possible role models, helping the youngsters see that they can become whatever they want to be.

“No one gets into this position without the help of someone else, so we have to continue to pay it forward,” she says.

That two-pronged approach — helping individuals while educating a cadre of future leaders who will work for solutions to larger problems — drives the community service of a 2010 Social Justice Award winner.

Pamela Robinson founded and has run the School of Law’s pro bono program for nearly 25 years. The program offers students the opportunity to work alongside some of South Carolina’s top attorneys to help some of the state’s poorest residents.

“I’m the type that asks, ‘What can I do for that person?,’ but also ‘What can I do in the big picture so people can have the dignity to help themselves?’ ” Robinson says.

Robinson credits her upbringing and family with instilling in her a sense of community service. She says it’s important her students see her being involved as well as encouraging them to participate in pro bono work and community service.

“When I go to court as a guardian ad litem and I look around and I see former students and I see presently enrolled students, they realize that I do mean what I say,” she says. “It’s important for law students to be able to look and say you’re involved in the community, you don’t just put your name on something.”

The Social Justice Awards are given to members of the university community who exemplify the philosophies of the late civil rights leader through acts of community service, social justice or racial reconciliation.

Sound like someone you know? Nominate a community-service-minded co-worker or student for USC’s Social Justice Award. You can find a nomination form at the Office of Equal Opportunity Programs website.