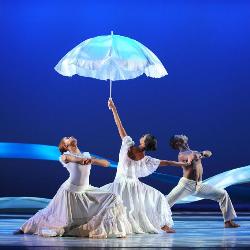 Ailey II is a dance company noted for its spirited troupe of emerging dancers.

Rural Texas in the 1930s didn’t offer much, especially for young black boys and girls. Cotton fields. Segregation. Jim Crow. It’s the world that Alvin Ailey knew for the first 12 years of life. Ailey would recall these and other memories — juke joints, church services and family gatherings — when he established the Alvin Ailey American Dance Theater in 1958, launching a new era of dance performance devoted to African-American themes.

“It’s only fitting that the dance company that helped to define the civil rights era is performing at USC as part of the university’s yearlong commemoration of the 50th anniversary of desegregation,” says USC dance professor Susan Anderson.

On Sept. 11, 1963, Anderson, Monteith-Treadwell and Solomon climbed the steps of the Osborne Administration Building to register for classes, becoming first black students to attend the university since Reconstruction.

Around the same time, artists like Ailey were changing the way America experienced art, music, dance, literature and theater, adds Littlefield, who is co-chairing the university’s commemoration of desegregation. “You can’t separate the cultural changes from the political and social movements that were happening simultaneously.”

As a dancer, Ailey confronted the stereotype of African-Americans not being able to perform ballet because of their body shape, intellect and stamina. “All those beliefs made up the Jim Crow system that was prevalent,” says Littlefield.

“It was at this time that Ailey choreographed and premiered many of the company’s signature masterpieces,” Susan Anderson says.

Among these early works is “Revelations.” It uses African-American spirituals, song-sermons, gospel songs and holy blues to fervently explore the places of deepest grief and holiest joy in the soul. The suite showcases such songs as “I Been ’Buked” to the rousing “Wade in the Water” and the triumphant finale “Rocka My Soul in the Bosom of Abraham.”

More than just a popular dance work, “Revelations” has become a cultural treasure, beloved by generations of fans. “It makes you want to sing and dance,” Anderson says.

In addition to performing “Revelation,” the Columbia performance will feature several new dances. “The External Knot,” a work choreographed by Troy Powell is set to music by Philip Glass and Robert Schumann; “Rusty,” a piece showcasing the entire company choreographed by Benoit–Swan Pouffer with music by Mikael Karisson; and “We,” a pas de deux set to music by jazz trumpeter Sean Jones.