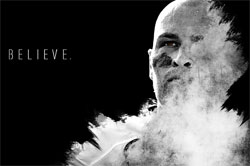 Alumnus Justin King tells the South Carolina Gamecocks story: This fall, USC sets out on a new path; one that begins under a hot Columbia sun and ends on a stage in Atlanta.

Any Gamecock fan looking for team highlight reels on the Internet in the past few years is sure to have seen a video cut together with inspiring words and chill-inducing music.

For Justin King, the man behind the popular videos, the Gamecock videos started as a hobby shortly after he graduated in 2010 with a degree in media arts. But those videos soon landed King a job working with ESPN cutting highlights for “SportsCenter.”

Those first videos took King a couple of hours to make. But with every new video, King tries to make each video better.

“Every time I sit down and begin a new video, my goal is to go further and push harder than before,” he said. “I want each one to have a better flow, tell a stronger story and capture more emotion.”

King’s videos, some with more than 100,000 views, continue to push his career forward. He left ESPN to move to San Antonio to work as a marketing strategist with Rackspace, a cloud-computing company. But on the side, King has created his own video production and social marketing company – Justin King Media.

“The more I made the videos with Justin King Media and the more they continued to grow, the more I learned different ways to promote them using social media,” he said. “I was just doing that on the side of my full-time job but it landed me here in a field that I enjoy and get to be creative in.”

Last year the Athletics Department reached out to King to produce a video in honor of Ray Tanner for the baseball season’s opening game.

“They wanted something emotional and that’s what I do,” King said.

His videos, no doubt, will give any die-hard Gamecock fan chills and that’s by design. For King, making Gamecock videos is about telling a story, the Carolina story that he learned during his years on campus.

“It’s about capturing memories. It’s about the moment when 80,000 people throw their hands up in celebration and, even if it’s only for a brief moment, everyone is united, everyone is family,” he said. “My goal is to inspire. I want to show that when a person truly dedicates themselves, anything is possible.”