Overheard in the Oval Office 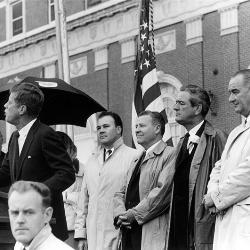 Getting today’s college students interested in the assassination of John F. Kennedy is fairly difficult since most of their parents were not even alive when the 35th president of the U.S. was shot dead in Dallas on Nov. 22, 1963.

But USC history professor Kent Germany has an ace in the hole: He has the voices of President Kennedy and his successor Lyndon B. Johnson to help tell the story.

Germany spent six years transcribing and researching the Johnson tapes for the President Recordings Project at the University of Virginia’s Miller Center of Public Affairs.

“This may have been this snapshot of the workings of power in American political life that we won’t get again, just because of the technology outpacing the laws, and with the egos of the people that were doing the recording outpacing the laws as well,” Germany says.

Germany introduces his students to the recordings as they discuss those particular presidents in classes and lets them hear the voices of the past.

“At the very least,” he says, “you get to sit in the room with dead people.”

Presidential recordings started in the Franklin D. Roosevelt administration and mostly ended after the U.S. Supreme Court ruled that Richard Nixon’s secret recordings could be subpoenaed in a criminal investigation.

“The understanding is that FDR put in the system to record press conferences because those ‘no-good reporters’ were misquoting him, were not getting it right,” Germany says. “So he had this experiment to have a record of what he was saying.”

Once you hear Johnson, it’s hard to unhear him.

There are only about eight hours of recordings for FDR, none of substance for President Truman and about 15 from Dwight Eisenhower.

“Once you get to Kennedy, who’s at heart a historian and has that kind of scholar’s mentality, we find a president taping to keep a record of his administration’s high points or the key policy dilemmas in his administration,” Germany says.

“He’s also somebody who’s very keenly aware of leaving behind a memoir. That’s the general idea why JFK does this is to have a set of notes to look back on.”

Kennedy would never get that chance, but it is his assassination that led to the early release of the White House recordings of both Kennedy and Johnson.

The recordings include a call newly sworn-in President Johnson made from Air Force One to Rose Kennedy, the mother of the assassinated president. Johnson later used his office recordings frequently, Germany says, having his staff do on-the-fly transcriptions so he could re-read them and refer to them when returning to a subject.

Johnson also recorded himself doing some of the more mundane things in the life of a president. One of the most famous is of the president speaking to his tailor. It’s a bit bawdy, but certainly humanizes a larger-than-life historic figure.

“Once you hear Johnson, it’s hard to unhear him,” Germany says. “There is nothing that will demystify the highest office in the land like him talking about how well his pants fit or don’t fit or what he wants to do to get them the way he wants.”

History professor Kent Germany spent six years researching and transcribing presidential recordings before coming to USC in 2006. Many of the recordings are available online.