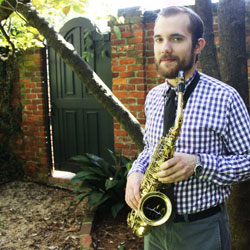 Andrew Allen has been chasing his dream of teaching music since he discovered music as a kid. This week he will graduate with a doctoral degree from Carolina's School of Music.

Andrew Allen knew in middle school he wanted to teach music. He realized his goal in August when he began teaching at Valley City State University in Valley City, N.D., and conducting jazz band. And his goal will be furthered when he graduates this week with a doctoral degree in musical arts performance from USC.

Allen says none of it would have been possible without the moral support of his family and the financial support from Carolina’s Presidential Fellowship program.

“I am a first-generation college student, from a blue-collar background, but knowledge and art were always something that were taken very seriously. My parents and both sets of my grandparents drove me to lessons and attended every performance, from middle school band on up,” he says. “I think with that support, it was easy for me to see how much fun it all was, and heightened my desire to take everything as far as I possibly could.”

Allen is the first participant in Carolina’s Presidential Fellows program to complete his degree. The merit-based program awards doctoral students a supplemental stipend totaling $32,000 awarded over 4 years. Spanning across 14 colleges and schools and representing more than 27 doctoral and master of fine arts graduate programs, the Presidential Fellowship is USC’s most prestigious universitywide award for excellence at the graduate level.

“The Presidential Fellowship aided in the fact that it insured that I would have to pay nothing for an incredible doctoral education,” says Allen, who completed his bachelor’s and master’s degrees at other colleges, but chose USC to study with Clifford Leaman, saxophone professor and associate dean of undergraduate studies in the School of Music. “In addition, I was intrigued by the opportunity I would have to associate with high-caliber doctoral students from across campus.”

Allen was involved with multiple university ensembles, but he says the Presidential Fellows program gave him a chance to meet and get to know graduate students in other disciplines. Fellows are nominated by graduate directors and have promising research agendas or creative projects, coupled with accomplished academic records, and — depending on the type program (doctoral or MFA) — superior standardized test scores or impressive portfolios.

“The Presidential Fellowship is a great recruiting tool that enables us to bring in top talent from across the country and around the world,” says Jessica Elfenbein, history professor and senior associate dean of USC’s graduate school.

Elfenbein also heads the Presidential Fellowship Program and meets with fellows individually and as a group in a bimonthly seminar. These meetings helped Allen branch out of the music school.

“It also furthered my attachment to Carolina, as a whole,” he says. “It was one of the few times in the week that I would be in a building other than the School of Music, around people other than fellow music students.”

Allen credits his time at USC with helping him stay competitive in the job market and he credits music faculty with helping him prepare to become a college faculty member. In January, he will be promoted to associate professor at Valley City State.

“I have formed so many wonderful personal and academic ties with people both inside and outside the music department that will stay with me throughout my career,” he says.