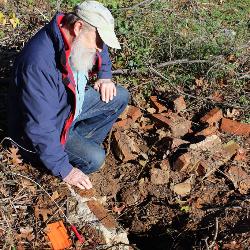 On a cold December morning, USC archaeologist Chester DePratter wanders the leafy grounds of the former South Carolina State Hospital in downtown Columbia — contemplating a similarly cold December almost 150 years ago and wondering what secrets from that era might be unearthed from the soil at his feet.

He turns and points to the west: “A wooden palisade with a walking guard platform was over here across the opening.”

This week — following months of negotiations with several parties, including the Department of Mental Health, which currently owns the property, and the Greenville developer who will soon take it over — DePratter began a four-month excavation that will involve undergraduates, graduate students and others who will assist with the dig and catalog artifacts.

The goal, he says, is to preserve what can be preserved while learning a little more about life in the Civil War prison before the property is developed.

Based on diary entries written by prisoners, Depratter can recount a detailed history of how they ended up at the camp after a monthslong odyssey that took them from a prison in Richmond, Va., to Macon and Savannah, Ga., then Charleston, S.C., before an outbreak of yellow fever prompted their next move, to a hilltop site in West Columbia.

After a couple of months at that makeshift location (dubbed Camp Sorghum after a part of the prison diet), the soldiers were taken across the river to the grounds of what was then known as the South Carolina Lunatic Asylum.

“In their diaries, prisoners talk about how they can hear the wailing of the asylum inmates from time to time and how strange it is,” DePratter says as he glances at the iconic red cupola of the historic Babcock Building next door.

But those sounds were only one aspect of the atmosphere at Camp Asylum, where prisoners slept in dugouts or tents or in crawl spaces under existing buildings — wherever they could find shelter from the cold. A handful of drawings from the period also show several structures that once stood on the 3-acre site, including crude barracks, guard towers and the palisade.

There are also reports of an escape tunnel, though its location remains a mystery.

Depratter says he would love to find evidence of any of the structures. However, because much of the site has been disturbed over the years — ground-penetrating radar provided by the Richland County Sheriff’s Department this week revealed a grid of utility pipes crisscrossing the property — figuring out where to dig in the relatively short period of time allotted could prove challenging.

Once he and his fellow researchers do determine the best places to dig, DePratter says he has an idea what sort of artifacts they might uncover. Prisoners were permitted to write home for money as part of a scheme to obtain federal currency. While they were not given any actual currency, they were given credit that could be used to purchase items from a prison store, including food, clothing, utensils and even small tools.

“We have a list of things that were sold in the store, so we know they were getting bottles with vinegar and various other liquids in them,” says DePratter. “They were buying plates and spoons, those kinds of things, to eat off of. They were able to buy pocketknives that they could carve with. They made crafts, napkin rings and things out of beef bones. There was a lot of craft industry because people were sitting around with not much else to do.”