Teaching the next generation of leaders 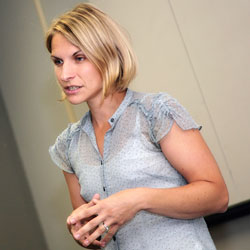 Philosophy professor Leah McClimans is helping teach a new generation of leaders in the medical field.

When Leah McClimans was a 20-something professional working in hospitals in Canada, she was terrified of being a leader. But now, she’s teaching her students how to become leaders and why leadership is important.

“I did not want to be a leader,” she says. “When I was 29, the idea of taking a seat at the table was really scary. And now, I want to be at the head of the table.”

She wants to teach her students how to take a seat at the table because, she says, improving patient care in health systems requires ethical leaders.

McClimans, a philosophy professor, teaches a health care ethics class that focuses on the impact on policy of having too few women and minorities in leadership roles. She also teaches a medical ethics class, which builds leadership skills through ethics case consultation. The Carolina Leadership Initiative and the Center for Teaching Excellence sponsor both classes.

Looking back, McClimans says she wishes someone had told her what leadership was really about.

Now she sees leadership as an important part of being a good citizen.

“I think it’s about taking responsibility for your actions,” she says. “It is in some ways about having a vision, but it’s less about blazing a trail and more about teamwork. It’s about seeing that we’re all in this together and there’s very little we can do alone.”

In her classes she likes to teach leadership as a hands-on style class, forgoing a lecture to create open dialogue. Last year, her medical ethics class created leaders by having health care ethics committees discuss cases. The students had to step up and become leaders.

“You don’t teach it by lecturing. I just let them do it,” she says. “From the first day to the last day they become functioning teams where the leaders develop skills about how to talk to the team and get them to function properly. It’s really amazing to watch.”