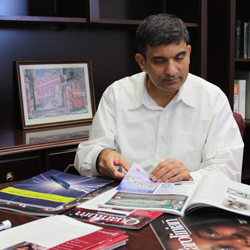 Milind Purohit is the new chair of USC’s Department of Physics and Astronomy. “I’m very happy that the younger people, the assistant professors now on the faculty, are doing very well in terms of getting grants,” he says. “That’s always a very good sign for the future.”

Milind Purohit, the new chair of USC’s Department of Physics and Astronomy, has dedicated a career to particle physics. Last year, he was part of a team that published evidence of the only elementary particle that had yet to be observed: the Higgs boson.

As a student at the Indian Institute of Technology in Delhi in the early 1970s, Purohit completed undergraduate and master’s work that coincided with the publication of a seminal series of theoretical papers. Those papers helped establish what is known in scientific circles as the Standard Model.

The foundation of particle physics, the Standard Model put forth a list of elementary particles (quarks, leptons and bosons) presumed to exist and postulated how they interact. Although some of those particles had yet to be observed at the time, the cohesiveness of the theory was convincing.

“Acceptance of the Standard Model grew rapidly in the 1970s,” Purohit says. “And in the early 80s, when the W and Z bosons were discovered, it was really accepted.”

Part of the difficulty in uncovering the Higgs boson was its uncertain mass, which Purohit and his team found to be 126 giga-electron-volts (GeV).

“That’s the discovery there, what its mass turned out to be,” says Purohit. “The model doesn’t predict the mass, and although there were hints that it would be in that range, there was nothing final. So we were very happy of course to finally get that.”

The amount of energy that an accelerator can provide has long been a limiting factor. Electrical and magnetic fields are used to accelerate particles like protons and electrons to speeds that are a significant fraction of the speed of light.

“Increasing energy, I think, is the main thing that drives discoveries in particle physics,” says Purohit. “When I was a grad student, Fermilab was the big accelerator and energies went up to 400 GeV.”

A noteworthy advance in the 1990s was the introduction of counter-rotating beams. In this technique, two particles from opposite directions are accelerated into a head-on collision, rather than one particle being accelerated into a large, stationary target.

The technical demands of causing a collision of two tiny particles the size of a proton in a circular accelerator with a circumference of more than 10 miles were daunting. The effort was well worth it, though, because the collision energy with two accelerated particles is double that with just one.

Higher energy isn’t the only route to new discoveries, though.

“I’m interested in a project in Japan right now, where they’re trying to study the decays of B mesons,” says Purohit. “But we can try to find these decays with indirect evidence. Sometimes the indirect evidence comes first, and then the high-energy accelerators know more specifically where to look and what to look for, as was the case for the Higgs boson.”

His co-workers on the Higgs project were from all over the world.