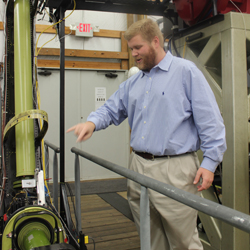 The CBM laboratory includes a rotor assembly for the Apache helicopter.

Travis Edwards is part of a USC effort that helps keep America’s soldiers safe and its military helicopters ready for action. And his contribution hasn’t gone unnoticed: Aviation Week recently named the mechanical engineering master’s candidate one of 20 promising young engineers in aerospace.

With the strength of the program here, Edwards knew that staying at USC for a masters would bolster his career options. He took a research position in the Condition-Based Maintenance (CBM) Laboratory immediately after earning a bachelor’s degree in mechanical engineering at Carolina in 2012.

“I’ve always been interested in aerospace, so that was a big factor in my continuing here as a graduate student,” he says. “The work here is also a great segue for getting a job in the aerospace field afterwards.”

The team in the CBM lab is working closely with the U.S. Army to enhance performance and maintenance procedures on the AH-64D, the Apache helicopter.

“We’re trying to improve the component life of the tail rotor swashplate right now,” he says, referring to the component that actually turns the rotor blades on the tail section.

Monitoring the condition of components is the heart of the CBM method. The goal is to move away from a scheduled maintenance plan, such as a recommended oil change every 3,000 miles with an automobile, and instead replace parts only when necessary based on their actual condition.

Sensors installed in several locations on a gear housing, for example, can record vibrations generated by an interior component. Properly interpreted, the vibration signature can be used to show that a component has significant life left, even if an arbitrary limit in hours of usage has been exceeded.

In cars, stretching an oil change by a thousand miles might save you a few bucks, short-term, so going to the trouble of setting up a CBM system might not be worth the investment. But with multimillion-dollar aircraft, savings are measured in tens of thousands of dollars, and in the millions for an entire fleet of helicopters.

“One of our earlier projects had almost a seventeen-to-one return on investment,” says Edwards, referring to a project that cost the army just over half a million dollars but saved more than $10 million. “And that’s just over the duration of the research. Going forward, the cost avoidance will really add up.”

Joining the CBM lab and helping move its work forward was an important part of Edwards’ recent selection by Aviation Week as one of 20 promising young aerospace engineers in their 20s.

“The application included work, community service and academics,” says Edwards. “I got to meet most of the winners at a conference in Arizona. It was a pretty bright group of people.”

Beyond awards, working in the CBM lab gives him the kind of experience that aerospace employers value.

“I get hands-on, actually-touching-the-equipment experience in this program. It’s not just theoretical work here,” Edwards says. “And I also get to deal with the customer. With a masters, normally you just have research experience, whereas here I will actually have two years of work experience under my belt too, because I’m providing a product to the customer, which is the army in this case.”