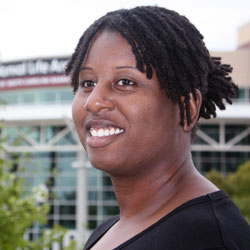 Deonna Farr came to USC in 2012 as a Presidential Fellow, which is a program created by the Graduate School to foster promising graduate scholars.

Deeonna Farr was on her way to becoming a medical doctor when she traveled to Ecuador as an undergraduate to work with a community clinician. What she saw there changed her mind.

She still wanted to help people, but she thought her talents and skills were better spent focused on improving health and wellness for whole communities rather than curing an individual’s illness.

“Public health works to build bridges between what’s discovered and what’s delivered in a culturally appropriate and efficient way,” says Farr, a doctoral student in health promotion, education and behavior. “By nature, it’s an interdisciplinary science.”

Farr worked as a project manager at the Stroke Disparities Project and earned degrees from Cornell and George Washington universities before coming to USC in 2012 as a Presidential Fellow, which is a program created by the Graduate School to foster promising graduate scholars.

Inspired by the energy and sense of community at USC, Farr quickly got to work, mentoring two undergraduate students and drafting a successful National Institutes of Health (NIH) grant during her first semester at USC.

The grant provides two years of funding so Farr can look at factors that influence cancer research participation by African-Americans. Working alongside Heather Brandt, an associate professor in the Arnold School of Public Health, Farr will examine individual and structural factors that lead to increased rates of chronic diseases, like cancer, in minority communities.

“One of the advantages of USC is that we have a high participation of African-Americans in our research and a large network of researchers and community partners to help us better understand how to address the problem of cancer,” says Brandt, who is also a faculty member at USC’s Cancer Prevention and Control Program.

Farr's grant builds on the successes of a larger NIH project at USC.

“The grant encompasses faculty researchers from several departments affiliated with the Cancer Prevention and Control Program and includes community organizations as part of the research team,” Brandt says.

This is crucial to building trust among participants.

“When community organizations have a partnership and a place at the table from the beginning, we’re more likely to have an impact,” Farr says.

And Farr’s study has no shortage of involvement from across disciplines and from local partners. Health promotion, epidemiology, psychology and nursing are all helping with the project.

“Public health is broader than what happens at a doctor’s office,” Farr says. “We’re working with communities to first find out what the needs are, then to build solutions based on that.”