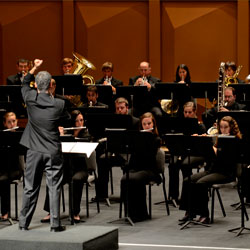 USC's director of bands Scott Weiss directs the Wind Ensemble, which was considered for a Grammy nomination for its recording, “Bernstein Transcriptions for Wind Band.”

Oboe player Briana Leaman doesn’t think about awards or accolades while practicing. For three hours every day, she’s focused on mastering the music. Dedication that deep gets noticed. Recently, Leaman and the other 61 members of Carolina’s premier wind and percussion ensemble received the attention of one of the most prestigious music organizations in the world, the Recording Academy, better known as the Grammy people.

While the USC Wind Ensemble did not earn one of the five coveted nominations, the group was on the first ballot to determine the 2014 nominations for the Best Orchestra Performance category. The band’s recording of selected works from Leonard Bernstein received critical praise for its spirited musicianship.

“I learned about the balloting while conducting in China last October,” says Scott Weiss, USC’s director of bands and conductor of the wind ensemble. “I started getting emails from people I didn’t know. At first, I thought my account had been hacked. Then I received a message from someone I knew. I asked him what was going on. He replied you’re being considered for a Grammy nomination. I was shocked.”

Recorded in the Koger Center for the Arts, the wind ensemble’s “Bernstein Transcriptions for Wind Band” features wind and percussion arrangements of “Fanfare for the Inauguration of John F. Kennedy,” Overture to “Candide” and the Symphonic Suite from the film “On the Waterfront.”

The recording was praised by the American Record Guide.

“The USC Wind Ensemble plays with confidence, energy and skill; all solos and instrumental sections sound excellent,” the review says. “There are too many great moments to mention. Here is a public university wind ensemble that sounds like one from a conservatory.”

MusicWeb listed the CD as a recording of the month and called it “wind-band playing of the highest order; what a joyful noise!”

Even with those accolade, earning a Grammy nomination isn’t easy. Twice a year, recording and media companies can submit recordings and videos for consideration. Some 2,000 entries are received. The academy then brings together nearly 150 industry experts to screen each submission.

“I’m impressed that we were in the running,” Weiss says. “Hundreds of classical recording are published every year. I’m just proud of the level of excellence we have here in the School of Music.”

Leaman likes the idea of being considered for one of the world’s highest music awards. “It’s fantastic and very rewarding,” she says. “The hard work has really paid off.”

The USC Wind Ensemble's recording "Bernstein Transcriptions for Wind Band” was considered for a Grammy nomination. The CD is available for purchase at USC Wind Ensemble performances and online at iTunes, Amazon and ClassicsOnline. You can hear a sample of the ensemble's play on the School of Music's bands website.