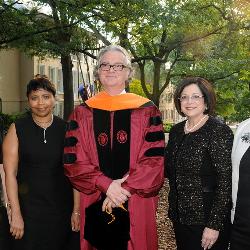 Benefactors of the McNair Center for Aerospace Innovation and Research gathered with faculty members this week for the investiture of the center's new director Zafer Gurdal.

McNair had become a renowned physicist before he was tapped from a pool of thousands to fly aboard the Challenger space shuttle, becoming only the second African-American to journey to space. While a later mission in 1986 ended in tragedy, McNair’s legacy lives on at USC’s McNAIR Center for Aerospace Innovation and Research.

Smalls, a native of Florence, S.C., says giving students a chance to attend USC and study science is an investment worth making. “We have an opportunity with this next generation of kids to pursue careers and interests in something other than farming,” she said. “At the end of the day, education is the key and it will take you on whatever journey you choose to take.”

Smalls said she wants to give Pee Dee students a chance to get the high-tech, high-paying jobs that come with the state’s growing aerospace industry. In 2011, Boeing opened its only jet manufacturing plant outside the Seattle area in North Charleston.

"In short, Marva wants to see a Pee Dee and a South Carolina where thousands of girls and boys are given the chance to become just like Ron McNair," USC President Harris Pastides said. "I would add that I would want them to be just like Marva Smalls."

Smalls earned a master’s degree in public administration (’82) and a bachelor’s degree (’77) from USC. While in college at Carolina, she began a student chapter of the NAACP and worked as a page in the South Carolina Legislature and for the lieutenant governor. Later, her career in the public sector included a stint with South Carolina Gov. Richard Riley and 10 years as chief of staff for U.S. Rep. Robin Tallon in Washington, D.C.

The scholarship was announced Monday and coincides with the investiture ceremony of McNair director Zafer Gürdal. Smalls attended the event along with two other women who have been instrumental in helping the McNair Center take flight: philanthropist and investor Darla Moore and Anita Zucker, chairwoman and CEO of The InterTech Group.

Both women donated $5 million to USC’s aerospace effort, which is dedicated to developing cutting-edge research for the industry while creating a pipeline of graduates working in the field. More than 20 graduate students are pursuing advanced degrees in aerospace at USC and initial projects include completion of the advanced composite and lightning labs.

These labs will "allow for comprehensive testing of new forms of composite materials, which are based on stated aerospace industry needs," said Tony Ambler, dean of USC's College of Engineering and Computing.

Following his investiture, Gurdal said the center will help students take advantage of that growing industry. "As the flagship university of the state of South Carolina, we have a tremendous responsibility to prepare our citizens to be ready and successful in this great opportunity," Gurdal said.

Ronald McNair’s widow, Cheryl McNair, traveled from her home in Texas to attended Monday’s events. She said her late husband spoke of moving to Columbia after he retired to teach at USC. “I believe he would have been so very honored. It’s touching because this is what he always wanted to do - to influence others, especially those in his own state.”