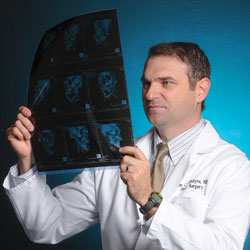 The School of Medicine is training the next generation of doctors.

It’s a chilly, rainy afternoon in April, but it’s going to take more than cold drizzle to stop Earl Baker from getting up at 0-dark-thirty the next morning to go turkey hunting.

That Baker is able to focus once again on his beloved pastime might seem an ordinary thing.

But it required extraordinary skill on the part of Ben McIntyre, M.D., one of the Department of Surgery’s newest physicians, to restore a measure of normalcy to the 86-year-old man’s life.

Baker and his wife met with McIntyre after a previous surgery to remove a cancerous salivary gland had severed a facial nerve. Half of his face — jaw, lips, cheek and eyelid — drooped uncontrollably as if he had had a stroke. In January of this year, McIntyre took Baker to surgery, using small muscles from the lower limb and from around the voicebox to help rebuild his facial structure. The result was nothing short of dramatic.

“I don’t know how Dr. McIntyre could figure out how to fix my face without knowing what I used to look like. But that’s what he did,” said Baker, a retired large animal veterinarian.

“It was aggravating and embarrassing for my face to look that way,” he added. “It’s still hard to do some things; there’s no feeling on parts of my face. But I sure look a whole lot better.”

McIntyre, a 2003 graduate of the School of Medicine, has been making people not only look better but also live more functional lives since completing plastic surgery residencies in Virginia and New Zealand and launching his professional practice in the school’s Division of Plastic and Reconstructive Surgery.

For the Rev. Elford Roof, the issue went far beyond looks. A malignant cancer in his mouth required the removal of a section of his lower jaw — the 81-year-old Lutheran pastor spread his thumb and forefinger several inches apart across his jawline to show how much.

“They were going to send me to MUSC for treatment, but I begged them, insisted really, that they find someone to do the surgery here in town,” Roof said.

McIntyre was consulted and agreed to assist in the operation. He removed a piece of Roof’s fibula and fashioned it into a new section of jawbone to fill the missing gap. Roof’s ability to chew solid food — and preach from the pulpit — was restored.

A recent CAT scan showed no sign of cancer. “Right now, I feel like I’ll live to be 100,” Roof said.

McIntyre’s plastic surgery cases run the gamut, from purely aesthetic and cosmetic procedures to complex, multiple-stage surgeries aimed at undoing the ravages of disease or some physical trauma. Recent patients include a person who nearly lost a foot in an all-terrain vehicle accident and another whose facial nerve was destroyed by an infection at the base of the skull.

There isn’t any part of the body that McIntyre doesn’t operate on; facial fractures, hand surgeries, joint replacements and rebuilding of jaws and palates are all on his repertoire. “It used to be that people with these medical problems had to go to MUSC, Duke or Emory for help. Now they don’t,” he said.

During his training in New Zealand, he learned a sophisticated microsurgery technique for breast reconstruction following mastectomy. The deep inferior-epigastric perforator (DIEP) flap technique uses the patient’s own tissue, usually taken from the abdominal area, to reconstruct the missing breast. The surgery has a 95-98 percent success rate and avoids many of the problems associated with traditional breast implants, he said.

“This type of breast reconstruction surgery will last a lifetime,” McIntyre said. “No more surgical intervention is required. In contrast, breast implants typically last about 10 years, then develop capsular contracture, which requires additional surgery. And patients with breast implants need MRIs every two years to monitor the stability of the implant.”

Only two years into his clinical practice at the School of Medicine’s Specialty Clinics, McIntyre is eager to continue building the referrals that are coming from around the state.

Now back at his alma mater, he acknowledges the irony that plastic surgery was not his initial choice in medical school.

“The only reason I wanted to become a doctor was to be a cardiac surgeon. But when I actually did that rotation as an intern, I hated every second of it,” he said. “That was a scary period of rediscovery. I had invested eight years of education to get to that point, and I wasn’t interested in the thing I thought all along I wanted to do.”

The turning point came during a residency rotation at a Shriners hospital for burned children. And it continues to shape his philosophy of medicine.

“We had a very young girl who had been injured in a bomb blast in Medellin, Colombia. Her leg was destroyed around the knee, and amputation seemed like the next likely step,” he said. “But the surgeons devised a procedure to cover her knee and prevented the amputation. ‘What a rewarding field to pursue,’ I thought, ‘making a difference in people’s lives.’”