A Gamecock in Kosovo 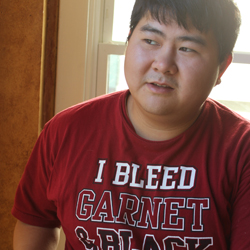 Joe Chen discusses his work for the United Nations in Kosovo.

When Xi “Joe” Chen returned to Columbia last week to defend his dissertation, he had a few other items on his to-do list as well. He wanted to catch a football game at Williams-Brice, he wanted to soak up a little more Southern charm and he wanted to score a few kid-sized Gamecock T-shirts to take home — to Kosovo.

As a political affairs officer for the United Nations mission in Kosovo since 2012, Chen primarily serves as an advocate for ethnic Serbs, the war torn republic’s onetime majority population that became the minority following the conflict with the region’s Albanian population in the late 1990s.

Chen’s role in Kosovo also is to encourage Serbs to accept newly established Albanian institutions necessary to access education, health and social welfare benefits. It’s a job that dovetails perfectly with the political scientist’s research at USC on local governance.

“My job is to make sure the minority groups are protected, because even though the Serbs did a lot of bad things during the war, plenty of bad things have been done on both sides,” Chen says. “At some point, in order to not inflict more wounds on future generations, you have to come together and move forward.”

On a typical day, Chen and a translator travel to Serb villages, or to camps for internally displaced persons, known as IDPs. There, he interviews residents about a wide range of complaints that arise from poverty, violence and a lingering resentment between ethnic groups. He helps individuals and families access existing programs designed to improve their situations, which frequently are grim.

“It can wear you out, but at the same time, you realize that you are one of the few hopes that their problems can actually be addressed,” Chen says. “If you don’t come through, their situation will never change.”

And for Chen, change is the keyword, something he relates to personally, as a Gamecock.

Prior to a U.N. internship in New York that led to the job in Kosovo, the native of Chongqing, China, spent nearly eight years at USC, where he says he was transformed through work with Sustainable Carolina and through humanitarian service projects like the ones that took him to New Orleans more than half a dozen times after Hurricane Katrina.

Along with his research, these experiences helped lead Chen to his current career. But they are also why, when he returned to Kosovo after successfully defending his dissertation this week, he stuffed several kids-sized Gamecock T-shirts into his luggage for children of families he has already helped.