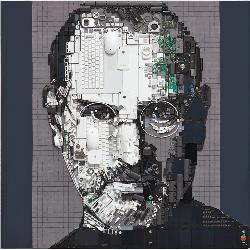 Kirkland Smith uses bits of plastic junk to create stunning portraits and other works of art.

Stooped on the floor, Kirkland Smith digs through large bins full of toy soldiers, cheap sunglasses and hordes of other kitschy trinkets. It’s not clear what she’s looking for — in a sea of plastic trash isn’t one piece as good as another? — but she singles out a few items and arranges them just so on a large square board on the floor. She stands, squints at her work and sighs, then kneels again, searching for the next piece.

Weeks later, the board is covered with plastic gewgaws of every description. Up close it resembles a mound of junk, but step away 10 feet, look again and — presto! The seemingly random swirl melds together to reveal a nose, cheeks and the piercing gaze of two eyes: a human face that seemingly breathes with emotion.

It might have seemed a foregone conclusion that Kirkland Smith would become an artist. She drew her first portrait as a preschooler and grew up with the encouragement of a mom, Martha Thomas, who was and still is one of South Carolina’s premier portrait artists.

“Kirkland started drawing well at an early age,” Thomas says. “But she also wrote a 19-chapter book when she was 10. I really thought her gift was going to be writing. She had three different teachers — drama, English and art — who separately encouraged her to pursue a high school scholarship at the Governor’s School for the Arts.”

Art won out, but no one could have predicted where Smith’s talents would take her — or the kind of work that would eventually win her so much admiration. Even as an art major at USC in the late 1980s, her path forward wasn’t clear. She liked representational art — drawing images of objects and people that look like the real thing — but at the time, the abstract vibe was still very much in vogue.

“So I took an interest in everything, including ceramics and sculpting," she says. "In a course Philip Mullen taught, I kept doing portraits for class projects, but he wanted me to experiment with the more abstract elements that were his style. One particular thing he said stuck with me: ‘If you want to learn something, go to the person who can teach you.’ I couldn’t learn portrait painting from Philip, but I could learn a lot of other artistic techniques.”

Other professors further developed her artistic edge, especially Harry Hansen, Chris Robinson, Truman Teague and Tom Dimig. But while her palette widened, she never lost focus. “I fell in love with the (potter’s) wheel, but I didn’t plan on buying a kiln,” she says. “Painting was my passion.”

After college, Kirkland married James Smith, a fellow 1990 graduate, who went on to earn a juris doctor from USC’s law school before pursuing a career in state politics. They settled in Columbia and had four children — three boys, then a girl — and for several years much of her waking life was consumed with the demands of motherhood.

“I don’t think you have to produce to be an artist,” she says. “For me, it has more to do with the way one looks at the world, relates to it and feels the desire for expression. But when our youngest, Shannon, was no longer a baby, I felt myself coming out of a mommy fog and beginning to think about what my dreams were and how to make them happen.”

Around that time, Smith and several artist friends began to read and discuss The Artist’s Way, a popular self-help book that outlines a pathway between creativity and a spiritual connection to God. Through journaling and prayer, she developed a more tangible goal, one she kept secret until an opportunity arose to study classical painting in Europe.

I have to say I didn’t aspire to be a trash artist. I was just looking for a bolder way to deliver the environmental message than I felt I could do with paint. In the process, I discovered an art form that was new for me.

“Philip Mullen’s words came back to me — ‘Go to the person who can teach you’,” she explains. “I found a couple in Argenton-Les-Vallées in southwest France who had studied with a master painter. It turned out they had been fellow students with my mother when she studied classical painting years before.”

Her husband, by now a representative in the S.C. legislature and a U.S. Army infantry reservist, was called up for active duty in Afghanistan in 2007. The couple agreed that moving the family to France during part of his deployment would help take Kirkland’s mind off of the war and give the children a chance to soak up a new language and culture. The temporary move would also allow her to pursue her dream in earnest.

“I learned so much more, not only about painting but about how to talk about my art and to understand it better,” says Smith. “I do think the experience changed me — I had to make a lot of decisions, and my husband came back from his deployment liking the new person I had become. And I came back determined to do classical realism.”

Opportunity knocked when an art competition focused on environmental landscapes was announced. Smith had concentrated in ceramics and sculpture at USC, and the 3-D nature of that medium had helped shape her thinking about form. That background coupled with her recent training in classical painting informed her as she created her first assemblage portrait.

“I spent three weeks thinking of what to do,” she says. “When I came up with the idea, I had three more weeks to do it. I asked a lot of friends to collect plastic for a week — the kind of stuff that ends up in the trash.”

Ultimately, the piece was rejected by the competition, but Smith shared a photo of the assemblage with friends in Columbia and across the country. The encouragement she received kept her going, and over the next three years she created more assemblages, often focusing on recognizable figures such as Marilyn Monroe, reggae musician Bob Marley and Columbia Mayor Steve Benjamin. Eventually, she had completed enough portraits for a one-person show.

“I have to say I didn’t aspire to be a trash artist. I was just looking for a bolder way to deliver the environmental message than I felt I could do with paint. In the process, I discovered an art form that was new for me.”

Commissions soon started coming, including a chance to collaborate with the Arts Fellowship group and members of the Church of the Apostles in Columbia, including Christy Goodman and Melanie McGehee. Called “The Life,” the five-foot tall, 15-foot wide triptych the group created resembles a stained glass window and depicts three scenes from the life of Christ: a manger at night, a tree surrounded by a pasture with a river running through it and a tomb with the stone rolled away.

“I worked with a lot of volunteers at the church on this, including children as young as two.” she said. “I think people like being involved with art, and with assemblage art they can be, even if it’s only in donating objects that can be incorporated into the finished piece.”

With all of her assemblage portraits, Smith incorporates materials that relate to the subject. A recently completed assemblage portrait of Apple cofounder Steve Jobs, for example, was constructed entirely with Apple computer parts, including keyboards, iPhones, cables and memory chips. In April, it won the $25,000 People’s Choice Award at the inaugural ArtFields competition in Lake City, S.C., moving Smith onto a considerably larger stage — without distorting her core values.

“I’d love to get my work in a bigger market and get pieces in permanent collections in South Carolina,” she reflects. “But if that doesn’t happen, it’s OK. I’m living an artful life, and I’m on a good schedule right now. I just want to have a balanced life. And one of the greatest blessings with what I’m doing now is the support I have had from my family and the community.”