Cleaning up with a new membrane 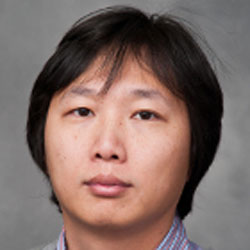 Miao Yu is an assistant professor in USC's department of chemical engineering, which has nationally ranked undergraduate and graduate programs.

The key to the membrane, made of graphene oxide, is its thinness.

“Having membranes so thin is a big advantage in separation technology,” said Miao Yu, a chemical engineer in USC’s College of Engineering and Computing who led the research team. “It represents a completely new type of membrane in the separation sciences.”

The membrane is less than 2 nanometers thick, but it also is very selective about which molecules can pass through.

The selectivity is based on molecular size, the team reported in the journal Science. Hydrogen and helium pass relatively easily through the membrane, but carbon dioxide, oxygen, nitrogen, carbon monoxide and methane move much more slowly.

In addition to selectivity, what’s remarkable about the USC team’s result is the quality of the membrane they were able to craft on such a small scale. The membrane is constructed on the surface of a porous aluminum oxide support. Flakes of graphene oxide, with widths on the order of 500 nm but just one carbon atom thick, were deposited on the support to create a circular membrane about 2 square centimeters in area.

The membrane is something of an overlapping mosaic of graphene oxide flakes. It’s like covering the surface of a table with playing cards. And doing that on a molecular scale is very hard if you want uniform coverage and no places where you might get “leaks.” Gas molecules are looking for holes anywhere they can be found, and in a membrane made up of graphene oxide flakes, there would be two likely places: holes within the flakes or holes between the flakes.

It’s the spaces between flakes that have been a real obstacle to progress in light gas separations. That’s why microporous membranes designed to distinguish in this molecular range have typically been very thick - “at least 20 nm, and usually thicker,” Miao said.

Anything thinner and the gas molecules could readily find their way between non-uniform spaces between flakes.

Miao’s team devised a method of preparing a membrane without those inter-flake leaks. They dispersed graphene oxide flakes, which are highly heterogeneous mixtures when prepared with current methods, in water and used sonication and centrifugation techniques to prepare a dilute, homogeneous slurry. These flakes were then laid down on the support by simple filtration.

Their thinnest result was a 1.8-nm-thick membrane that only allowed gas molecules to pass through holes in the graphene oxide flakes themselves, the team reported. They found by atomic force microscopy that a single graphene oxide flake had a thickness of approximately 0.7 nm. Thus, the 1.8-nm-thick membrane on aluminum oxide is only a few molecular layers thick, with molecular defects within the graphene oxide that are essentially uniform and just a little too small to let carbon dioxide through easily.

The advance has a range of potential applications. With widespread concerns about carbon dioxide as a greenhouse gas, the efficient separation of carbon dioxide from other gases is a high research priority. Moreover, hydrogen represents an integral commodity in energy systems involving, for example, fuel cells, so purifying it from gas mixtures is also an active area of interest.

Yu also notes that the dimensions of the molecular sieve are on the order of the size of water, so, for example, purifying the copious amounts of tainted water produced by hydraulic fracturing (fracking) is another possibility.