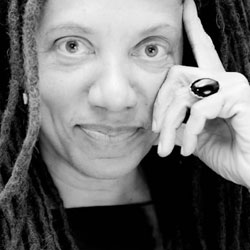 Poet Nikky Finney will deliver the Adrenee Glover Freeman Lecture. The lecture is part of the yearlong commemoration of the 50th anniversary of desegregation at the university. Finney also is writing a poem that will be placed in the on-campus garden dedicated to the events of 1963.

Finney, a native of Columbia, joined the university’s faculty this fall as the John H. Bennett, Jr. Chair of Southern Literature and Creative Writing in the College of Arts and Sciences. Her presentation will take place from 7 – 8 p.m. in the School of Law auditorium. It is free and open to the public.

Her talk, titled “Diamonds in a Sawdust Pile,” explores the voice and vision of black Southern writers. It is one the signature events of USC’s yearlong commemoration for its 50th anniversary of desegregation.

Finney, who had taught at the University of Kentucky since 1991, won the 2011 National Book Award for Poetry for her collection “Head Off & Split.”

She was a writer, editor and photographer for the National Black Woman’s Project in Atlanta from 1984 to 1986 before turning her creative energy toward poetry. Since 1985 she has published four collections of poetry, including “On Wings Made of Gauze,” “Rice,” “The World is Round” and “Head Off & Split.” She also has published “Heartwood,” a collection of short stories, and edited “The Ringing Ear,” a poetry anthology. “The World is Round” won the 2004 Benjamin Franklin Award for Poetry and “Rice” won a PEN America Open Book Award in 1995.

For more information call 777-4007 or visit the Women's and Gender Studies Program website.