Much to crow about 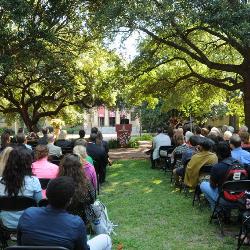 2013 State of the University

The Carolina community celebrates the university on the historic Horseshoe.

It is time for South Carolina to make higher education a stronger priority. That was university President Harris Pastides’ main message for the USC community and lawmakers during his annual State of the University address Wednesday (Sept. 18).

“Let me say emphatically that it is time to make a new compact with the state of South Carolina,” Pastides said on the historic Horseshoe. “Let’s find a formula for fairly funding a public baccalaureate education. Let’s not consider a college degree from Carolina a luxury but rather a necessity for our state, and let’s invest in higher education at levels that make common sense.”

Pastides wants higher education to be more accessible and affordable for South Carolinians. He plans to ask state lawmakers to work with the higher education community to find a fair funding strategy by looking at public appropriation models in states like Tennessee, Indiana and Colorado. A fair model will require fresh funds, he said.

To meet these needs, the president said he would agree to a three-year moratorium on tuition increases and new earmarks for specific projects in return for increased state funding.

“Achieving our goal won’t be easy but it is the most worthy cause that I can bring to you for your consideration,” he said. “Let’s not stand idle while the sons and daughters of our state debate with their families whether they can afford a college education.  Surely itwill cost much more for them, and for us, if they turn away.”

The university is a vital part of the state economy and overall wellbeing, Pastides said. USC annually contributes $4.1 billion to the state’s economy, 30 times more than what the university receives in direct appropriations.

This summer the president consolidated all the university’s economic outreach efforts into the Office of Economic Engagement, and moving forward USC will continue to have an even greater statewide impact, he said.

USC’s vital role in the economic and overall wellbeing of the state is just one aspect of the university’s identity, Pastides said. Carolina is also a globally recognized research university, an institution that has been recognized for a superior student experience and a university that is committed to developing flexible new models for college access and affordability.

The president highlighted some of the university’s top achievements over the past five years that he has been at the helm of Carolina.

“I think that a five-year milestone provides an opportunity to assess where we’ve been and what we’ve accomplished,” Pastides said. “Of course these have been very turbulent times for our society. And we have had our struggles, but as with an individual or a family, overcoming struggle makes one stronger and leads to progress.”

Following the previous year’s announcement of USC’s first integrated marketing campaign, Pastides announced the unveiling of the newly designed sc.edu and new content management system for the university’s website that will give all visitors “a true feeling of what it’s like to be right here at USC.”

Just a few of Carolina’s bragging points this year: