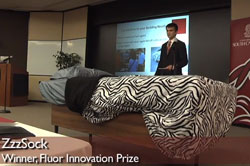 Freshman Jeff Blethen was among the student winners of The Proving Ground 2013.

You never know when inspiration for a business venture will happen. For University of South Carolina freshman Jeff Blethen it was waking up on a bitter cold Chicago night after his covers had fallen to the floor and knowing he would have to make his bed from scratch.

Blethen’s idea to make bedding as easy as pulling up a sock earned him $15,000 in cash and start up support Tuesday (Nov. 19) at The Proving Ground, the University of South Carolina’s entrepreneurial challenge. The bedding fits over a mattress like a sock, which keeps a person covered and bed-making a simple process.

“When the covers fall off it’s really annoying. It leaves you shivering in the winter in Chicago,” said Blethen, who heard about the competition through the USC Incubator. “I’ve learned about the business process and how hard it is through The Proving Ground.”

Blethen, who likens his product to a “Snuggie for the bed,” says he will use his winnings to get an online store up and running by Christmas.

The first year S.C. Honors College student was among a trio of ventures that won $15,000 prizes. Blethen won the Fluor Innovation Prize.  Fellow international business students Jordan Matthew Dorchuck and Lukas Miller won the Maxient Social Impact Prize for Religion Share, which provides social media sites for people to engage others in their faith group. Dorchuck and Miller plan to launch Trinity Share to provide the 78.2 million Roman Catholics in the U.S. an online community to connect with one another and freely discuss matters of faith.

Chemical engineering graduate students Michael Mayeda and Sungtak Kim won the SCRA Technology Ventures Prize for a technology that converts a variety of transportation fuels into light, portable propane that soldiers and relief workers can easily carry into the field.

Mayeda says he and Kim will use their winnings to secure an exclusive license and finalize negotiations with a partner. The SAGE team won $25,000 in the 2012 USC Fuel Cell Challenge. Mayeda says the feedback of judges has been invaluable.

“It’s good validation,” Mayeda says. “It tells us that we are on the right track. These judges are entrepreneurs who think you have the legs under you to make your idea succeed.”

With so many creative business concepts, The Proving Ground added a fan favorite category in which two teams compete for $1,000, decided by applause. International business major Andrew Kovtun won the crowd with his venture Sale Abroad, an online concierge service to help students secure the most affordable study abroad experience possible.

The competition, now in its fourth year, was re-launched last year as The Proving Ground with a new format and a prize package that places it among the nation’s top collegiate business plan competitions. The new multi-stage elimination format that culminates with a pitch session before a panel of judges, much like the hit ABC-TV show “Shark Tank,” has led to more students competing and an overflow crowd to watch the pitch finale. This year’s prize package and startup support totaled a record $50,000.

Dean Kress, associate director of the Moore School’s Faber Entrepreneurship Center, says The Proving Ground is helping to foster a student startup culture at the university.

Two of those graduates are Aaron and Candice Hark, founders of Maxient Software Company, who have been sponsors of The Proving Ground all four years and serve as judges.

“It’s important to us to give back to the University of South Carolina and faculty like Richard Robinson and Dean Kress who have helped us. It’s an honor,” Aaron Hark says. “The competition has come a long way. It gets better every year for entries and attendance.”

Candice Hark says she is excited to see the competition’s growth.

“It’s exciting to see the variety of ideas. What is striking is that there is a wide range of ideas. That represents entrepreneurship at large,” she says. “USC is building a solid entrepreneurial ecosystem, and the momentum is there.”

Aaron Hark says The Proving Ground is an example of how the university is meshing academia and research with the economy.

“This is where you want to invest,” he says. “These are the ideas that will push South Carolina forward. The excitement of The Proving Ground renews our entrepreneurial spirit. It gives us a brighter perspective.”