Return of the Scottish journal 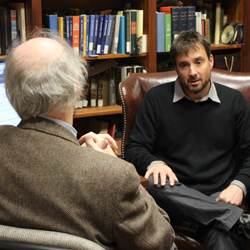 When people think of Scottish literature, they might not automatically think of the University of South Carolina, but they should. Scholars in the field certainly do — and have for decades. Now, with the resurrection of the journal Studies in Scottish Literature following a five-year hiatus, that reputation is poised for another boost.

After putting together a new editorial board, Scott and Jarrells put volumes 13-34 online in August 2012. The next month, they published the first completely new volume of the journal online (with a print-on-demand option). They expect to have the rest of the back issues online and ready for download by the end of 2013, which also is the journal’s 50th anniversary.

“The back issues are a who’s who of every generation of Scottish scholars,” says Jarrells, whose own interest in the field dates back to a research assistantship at the University of Glasgow. “Think of a big person in the field and you can go back and find his or her articles in one or more volumes of the journal. We want to keep that going, keep those people being read, but expand from there.”

To keep up with current trends, the new editors broadened the journal’s scope, incorporating scholarship from areas that sometimes overlap with Scottish literature studies, such as Southern studies, regional studies and global literature. They also resurrected a component featured in the earliest days of the journal — a symposium that would allow the field’s top scholars to debate relevant topics.

“And we really did take off, partly because the symposium drew attention to that first new issue, partly because it was open access,” Scott says. “Over the next year, we had over 40,000 full text downloads. We’re now well over 50,000, which is a huge thing for a journal.”

For comparison, Scott estimates that library subscriptions for the print journal ran between 100 and 150. At its peak, the total print run was only 300.

The journal has been accessed online by users from at least 120 countries, which Scott points to as justification for the journal’s broadened editorial scope.

“If you look at the top 10 countries, they’re not all traditional Scottish settlement areas,” says Scott. “There is Canada and New Zealand, the United States, but there’s also Brazil and Turkey and India in this group. There’s also quite a lot of interest in Scottish literature in Spain.”

Back home at USC, that kind of interests translates into an even larger reputation among Scottish literature scholars, who already viewed the university as a major player in the field.

“I think the journal helps the university maintain connections with people who are interested in Scotland and Scottish history,” Jarrells says. “Academically, the journal has a real scholarly presence, which I think will grow. For the English department and for the library, it’s a very good thing.”

USC English professors Patrick Scott and Tony Jarrells have revived the journal Studies in Scottish Literature following a five-year hiatus and are putting back issues online. Read the journal and find out why USC is considered one of the leaders in the field.