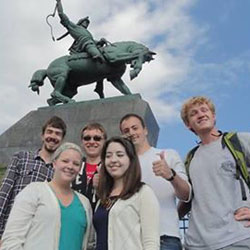 Students in the Russian program found a trip abroad to be "life-changing."

Fifteen years ago, USC’s Russian program was struggling, but that was before Judith Kalb and her husband Alexander Ogden, associate professors of Russian and comparative literature, took over the program.

At the time, there were only two students signed up for a Russian culture course and only seven students enrolled in the two Russian language sections. Today, the program enrollment has grown to include more than 150 students each semester, mostly because of different initiatives.

Each year the program offers the Ludmilla Ignatiev Callaham Award, a $3,000 scholarship awarded to an advanced student in Russian and the sciences, engineering or math. Aside from this scholarship, Kalb, the program’s director, believes there are a couple of other factors that have increased enrollment in the program.

“The establishment of the Russian major in 2002 — South Carolina's first and only Russian major — has attracted increasing numbers of students to the program,” she said. “Many of our students study abroad, and our new program with Ufa should result in these numbers going up even more.”

Eight students participated in the study abroad program in Ufa, the capital city of the Russian republic of Bashkortostan, over the summer. These students attended Bashkir State Pedagogical University, one of the sites the U.S. government chose for its critical language training, and lived with host families.

The trip was filled with activities that gave students an inside look at Russian culture. They visited typical Russian sites such as the banya (Russian bathhouse), the ballet, the opera and religious sites. They traveled to Aigir, a rustic camp, and hiked in the Ural Mountains.

For the students on the trip, it was a life-changing experience that inspired several of them to return to Russia.

"Ufa is an amazing chance to have the ‘full Russian experience,’” said Ryann Pasquale, a joint major in Russian and international relations who stayed on in Russia to teach English in Aigir. “The wonderful people I met and the excursions we took were experiences I will never forget."

Chris Shuping, a recent history graduate, has also returned to Russia and is teaching English in Vladimir. And Madeline Seiver, who is studying Russian and political science, has decided to return to Russia this fall.

“I fully expect the other trip participants to return to Russia as well,” Kalb said. “It's incredibly exciting for all of us on the Russian program faculty to see the students having such a phenomenal experience. It is exciting, life-changing, and absolutely worth doing.”