The science of writing 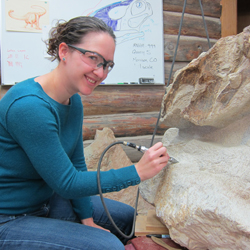 Stephanie Pappas tries her hand at fossil preparation at the Morrison Natural History Museum in Morrison, Colo. on Nov. 8, 2013. Pappas was at the museum reporting about the discovery of this fossil, an Apatosaurus snout.

Stephanie Pappas embarked on a brand-new career as a science writer in the terrible economic climate that prevailed in the spring of 2009. But despite the turmoil in the job market at the time, the South Carolina Honors College graduate quickly found freelance work that, within a year, turned into a full-time position with LiveScience, a science news website with global reach.

And the job provides more than just a paycheck. It nourishes her wide-ranging curiosity. “It’s all over the map what we cover – the environment, health, psychology,” she says. “I love that.”

Working for LiveScience, Pappas writes about just-published research from serious scientific journals, often written in prose unfathomable to the layperson. Her task is to make the heart of the story understandable to a wide audience.

Part of the appeal of her job is that it lets her delve into the actual data in a given field, which can often undercut popular preconceptions.

“I did a whole series of stories on school bullying, and how people tend to kind of shrug off bullying as something that just happens, but there are intervention programs that are really, really successful in ending it,” Pappas says. “It’s an environmental thing, not a necessary step in childhood.”

More recently, Pappas has been seeking out science stories in her own backyard in Denver, where she has written about the devastating floods that recently swept through Boulder and other nearby Colorado towns. She’s also cozying up to local paleontologists, who pull dinosaur finds from the ground right in the Denver exurbs.

“So much of science writing is concentrated in New York and Washington, D.C.,” she says. “So it's an advantage to be out here where you can visit these locations and talk to researchers in person.”

After graduating from USC in 2006, Pappas tried teaching and graduate school in occupational therapy. Finding work she really enjoyed, though, took another year of education — and the breadth of her studies at Carolina was key to getting into the science communication program at the University of California Santa Cruz.

“Santa Cruz is a great program because they take you from basically knowing nothing about journalism and the assumption that you’ve been working as a researcher, post-doc, Ph.D. student or whatever,” she says. “It’s taught by working writers. You get to know people who are in the field, and since it’s such a word-of-mouth kind of profession, it’s really helpful.”

“The classes I took in the Honors College and the lab work I was able to do in the psychology department really bolstered my credentials,” she says. “It worked out well.”

One of her favorite assignments as a student came during an internship at the Stanford University School of Medicine news office. A mummy from the Legion of Honor Museums in San Francisco, which had never been unwrapped, was examined internally with noninvasive technology that is now a fixture in medicine: magnetic resonance imaging (MRI).

For a story she was preparing for the medical school’s newspaper, Pappas took pictures of the process of moving the mummy from San Francisco to a laboratory in Palo Alto, Calif., a 60-mile journey made with painstaking care. After watching it being loaded into a high-field, research grade MRI, Pappas was on hand for the world premiere of its interior.

“We were all gathered around the computer screen, which was showing the images immediately,” she says. “The first thing you could see was the skeleton inside, and then these amulets littered throughout the wrapping.”

An Egyptologist from the museum was on hand who could interpret the meaning of the scarab beetles and other ornaments. The expert used those observations to assess the socioeconomic status of what was determined to be a woman under the wrapping.

“She was fairly well-off,” Pappas says of the thousands-of-years-old Egyptian. “It was a well-done mummy job.”

USC Honors College graduate Stephanie Pappas found a way to combine her loves of science and writing in a job with LiveScience. One series of articles she wrote focused on research into bullying and intervention programs: link, link, link and link.