Zoning out, zooming in 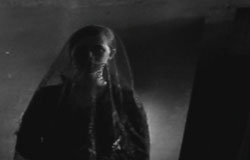 Alumni Steve Daniels' film "Ask the Bones" tells the story of a 911-call operator who becomes obsessed with a disturbing call from beyond.

On a chilly winter morning when he was eleven years old Steve Daniels wandered into an Arkansas forest and came out a filmmaker.

Okay, the transformation wasn't quite so quick—in fact, Daniels wouldn’t truly discover his inner Hitchcock until his folks gave him a camcorder two years later—but something strange did occur out there in the woods, something that would literally and forever alter how he looked at the world.

“I had this strange, almost out-of-body experience where I became aware of my subjective viewpoint,” says Daniels, ’95. “We were out looking for a Christmas tree, snow on the ground, and I just kind of zoned out. I was walking around, looking at my feet, not knowing where I was going. I didn’t realize it at the time, but I was framing up and shooting a movie in my head.”

A lover of horror movies and ghost stories, Daniels began shooting video and Super 8 films in high school then majored in media arts at USC, where professor Harry Miller’s class on postmodernism in media broadened his vision. “I learned so much from that class,” he says. “Film analysis and theory, how to decipher media, how to be playful with your message—it was a huge influence.”

Now an editor for Columbia-based media production company Mad Monkey, Daniels pursues his cinematic dreams at night and on weekends. His 2005 short “The Gibbering Horror of Howard Ghormley” was included on a DVD released by Fangoria magazine, then, in 2009, another film, “Dirt Dauber,” won Best Short at the H.P. Lovecraft Film Festival. In 2011 his macabre fantasy “Dirty Silverware”— which just happens to feature a creepy walk through an even creepier wood—tied for Best Short Film at Spain’s Sitges Film Festival.

Most recently, Daniels completed a short he describes as a postmodern nod to George Miller’s “Road Warrior”—only in Daniels' world, the bikers all ride Big Wheels. Titled "M is for Marauder," the film was named a finalist this month for inclusion in the upcoming horror short anthology "ABCs of Death 2."

“There’s something about adults doing kids stuff that I always come back to,” says Daniels, who hopes to one day direct a feature-length film. “I love horror, love to scare people, but I’m really drawn to humor and the absurd.”