At home in the wild 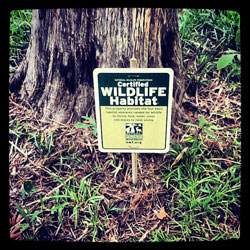 Six years ago, when creative writing professor James Barilla first came to USC and bought a house in town, he dug up half his driveway, killed his lawn through neglect and planted a sign in the dirt announcing that his yard would be unlike any other on his block.

Barilla wasn’t trying to be a bad neighbor. Rather, he was trying to be a good host—to the birds and the bees, to wildflowers and fruit trees, to any and every type of flora and fauna that might possibly make a go of it in the urban Midlands landscape. He was also researching the memoir that would eventually become “My Backyard Jungle,” published earlier this year.

“Our yard was pretty bad when we arrived, but by the end of that summer it was just like a parking lot,” says Barilla. “There was very little life, but that meant I could start from scratch. So I thought, ‘Okay, I’m here. What does it mean to be here — ecologically?”

To make things official, Barilla had his property declared a “certified wildlife habitat” by the National Wildlife Federation. The designation, in a nutshell, means the property surrounding his home provides the essential habitat elements for the survival of wildlife: food, water, cover and places to raise young.

“I want our yard to be the kind of place where my kids can catch grasshoppers by day and fireflies at night, where they can dig up potatoes and pick strawberries,” he wrote in the introduction to "My Backyard Jungle." “The yard I imagine will be interesting and alive.”

Sure enough, that’s exactly what happened—to the amusement of some, the consternation of others and, presumably, the delight of a whole bunch of

But what began as an urge to provide refuge for a few critters and plant an edible garden quickly evolved into a deeper investigation of what it means for humans to coexist with the rest of the natural world—for better or worse. With help from a grant from USC’s Office of the Provost, he traveled to India to observe urban monkey populations, then checked out urban marmosets in Brazil, backyard black bears in Massachusetts and a range of other urban wildlife populations as a way to contextualize what he was doing back home in Columbia.

“I started thinking, ‘What are the limits?’” says Barilla. “What could live here? Setting aside for a moment the question of what’s native and just thinking about what’s endangered or not endangered, could you create habitat for something that’s endangered in a subtropical climate elsewhere?”

“For me, what puts my own backyard in an interesting context is how these other people manage to live with these creatures, and how that relationship has evolved, in some cases, over thousands of years.”