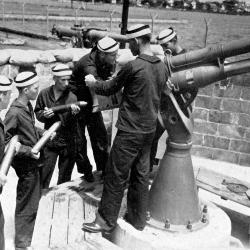 USC's Class of 1943 NROTC cadets prepared for service in WWII.

When Robert McAlpine and Vernon Sumwalt graduated from Carolina in 1943, they weren’t thinking about coming back to campus for class reunions. They just hoped to make it back, preferably in one piece, from the war in the Pacific.

The two were among 13 USC graduates that year who were commissioned through USC’s Naval ROTC unit and sailed straight into the breach of World War II. Seventy years later, only four members of the group remain. On Oct. 31, McAlpine and Sumwalt plan to return to USC for not only their 70th reunion but also to participate in a NROTC pass and review ceremony on the Horseshoe as part of Homecoming weekend.

"The war was breathing down our necks the whole time we were students," McAlpine said. "As I recall, we went down to the old library — South Caroliniana — and got our commissions there. Thirteen of us became ensigns."

McAlpine immediately began training and spent Christmas 1943 enroute to Pearl Harbor, Hawaii. He served as a deck officer on USS The Sullivans, a destroyer named in memory of five brothers from Iowa killed in action early in the war.

Sumwalt was aboard the light cruiser USS Phoenix and also saw action in the Pacific. After the war, he graduated from USC’s law school in 1948 and practiced law for nearly 45 years.

When he returned to civilian life, McAlpine tried his hand at several trades. "I worked for a while in a mill — hated that. Then I went into the sawmill business and lost every bit of money I had," he said.

He found his niche working for the U.S. Forest Service, and after earning a master's degree in forestry became a project leader. He later retired in Gainesville, Fla.

"Now I'm down here and Steve Spurrier is up there," he said with a chuckle, referring to USC’s head football coach who was a player and later coach at the University of Florida in Gainesville.