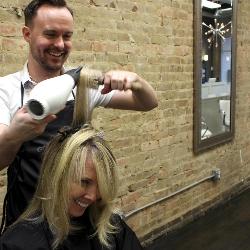 Alumnus Gregory Garrett says his time at Carolina has been an important building block as he started and continues to expand his business in Columbia.

Gregory Garrett stumbled into his career after an apprenticeship at a salon turned him on to hairstyling while attending the University of South Carolina.

It wasn’t the traditional path for a college graduate but as the owner, manager and head stylist of Columbia’s newest salon, Garrett isn’t just styling hair. He’s putting his hospitality, retail and tourism management degree to work daily.

A 2007 graduate of the College of Hospitality, Retail and Sport Management, Garrett knew he wanted to do something creative.

“I always wanted an artistic career, but I didn’t want to be a starving artist,” he says. “I could make a living off of doing something fun and creative.”

This summer Garrett struck out on his own, launching Metropolis Salon and Dry Bar a block from Columbia’s thriving Main Street. He’s been drawing on his experience at Carolina since.

“We might not have been taught how to do hair but the daily running of a business and interacting with people in a ‘hospitable way’ — it prepared me better for that than going to cosmetology school would have,” he says. “I think a lot of hair stylists struggle building their books when they start but having that background in business management and customer service has helped.”

Everything else about the salon business, from the cutting to the coloring, he learned on his own as an apprentice. As an owner now, Garrett says he wants to make Metropolis like a bigger city salon where stylists continue to learn and improve their craft.

“I wanted a place where I was happy to come to work,” he says. “I had a vision for an education-based salon, a team environment where we can help each other learn together and improve each other.”

Garret says the clients are noticing. Sales are up month to month, the staff has grown and the schedules can fill up quickly. The dry bar service, a newer addition to the Columbia scene that offers customers a professional style instead of a cut, has also grown faster than anticipated, he says.

The salon also does wedding services, something Garret was first exposed to in instructor Annette Hoover’s wedding planning class.

“It’s helped secure my business and the trust of my clients by asking them a lot of questions that no one else would ask them,” he says. “I know from that background what to ask and how to use that in what I do.”

Between working 50 to 60 hours a week behind the chair and running the business, Garret is keeping busy — and plotting his next moves to see the salon continue to grow.